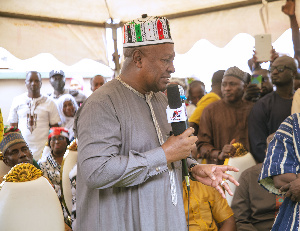 Former President John Dramani Mahama has urged Ghanaians to join forces to collectively address the many challenges confronting the country.

According to him, this is because “we are one people with a common purpose, identity, and destination.”

Speaking at this year’s celebration of the Ahobaakese Festival at Abeadze Domenasi which also marked the 25 years reign of Daasebre Kwebu Ewusi VII, as Paramount Chief of Abeadze Traditional Area in the Central Region, the ex-President noted that a community without peace jeopardizes its chance of sustainably improving the lives of its people.

“We must, therefore, endeavour to promote peace within our community not just by words but indeed by our deeds,” Mr Mahama added.

“In highlighting the importance of peace and unity towards our development as a country, it is hard for one to overstate the contribution of His Royal Majesty Dasebre Kwebu Ewusi VII, to the development of our country Ghana. He has served with admiration as the President of the Central Regional House of Chiefs. He has also served as the Chairman of the Board of the Electricity Company of Ghana. He’s also served as the Vice President of the National House of Chiefs. His services in these roles have been a defining feature of the Central Region and the entire.”

The ex-President added: “Today, I celebrate a man who epitomizes selfless and dedicated leadership. I celebrate a man who to me is a brother and friend. I want to thank you for your wise counsel and support to me personally, both while I was in office as Vice President and President and also in my capacity as former President.”
He assured that his next government will transform the Abeadze Traditional Area should Ghanaians vote him back to power in the 2024 election.