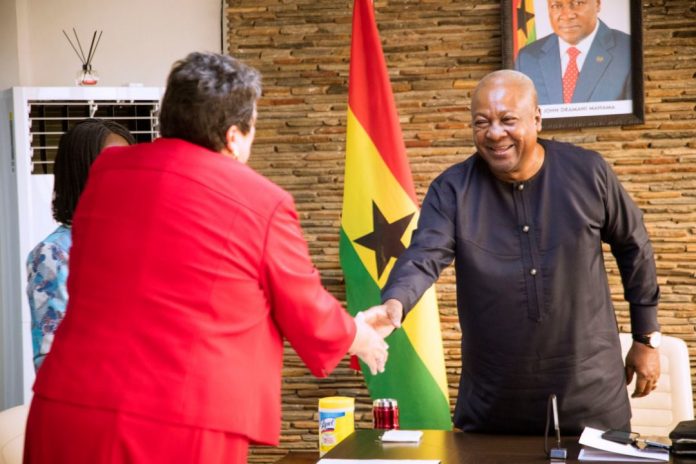 Former President John Dramani Mahama has held discussions with American Ambassador to Ghana, HE Stephanie S. Sullivan on matters of mutual interest to Ghana and America.

Issues raised during the discussions include the current state of Ghana’s economy, regional security and its implications for Ghana, review of the constitution, investment in local industries, and the hostility of the Electoral Commission to the NDC.

Mr. Mahama noted that Ghana’s economic woes have been compounded by the missteps of the government, poor economic decisions, the collapse of indigenous banks and finance institutions instead of saving them, corruption, and the misappropriation of COVID-19 funds, which were shared to party officials.

According to President Mahama, government had almost GH¢30 billion in COVID-19 relief support from internal and external sources like the IMF and the World Bank, “a huge amount, which was more than sufficient to handle any crisis if the money had been used well and not abused.”

He however expressed confidence that following the IMF programme, there would be more discipline in government’s handling of the economy.

“Confidence will only be restored when people know that we are in a programme and that the government will not behave as recklessly as it did in the past” he said.

“We have been very restrained in our opposition because we know the seriousness of the situation. We have been very generous in giving advice about what they should do. But this is a very arrogant set of people who would not want to act like they took advice from somebody else. They have this mantra, we have the men. Unfortunately, the men don’t seem to know what to do.”

Earlier, Ambassador Sullivan congratulated President Mahama for his book ‘My First Coup D’etat’, which she said gave her a good insight into Ghana. The book, she said, is very well-written, adding that she recommends the book to others who want to know about Ghana.