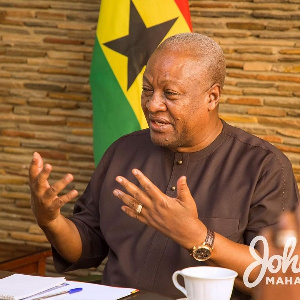 Former President John Dramani Mahama has criticized President Nana Akufo-Addo’s appointments of judges to both the superior and lower courts.

Speaking at the opening of the 2nd Annual Lawyers Conference of the opposition National Democratic Congress (NDC) on Sunday, August 28, 2022, the former president said President Akufo-Addo was packing the judiciary with judges of political linings suggestively for the New Patriotic Party.

He said the conduct of the president was fueling the worsening public perception of a ‘broken image’ of the judiciary.

Mahama said “so badly has the image of our judiciary deteriorated that many of our citizenry openly make a mockery of our justice system and of our justices” adding that the president was making matters worse.

“The unfortunate situation with our judiciary is exacerbated by a President who is packing the courts and appointing openly partisan judges to both the superior and lower courts. To make matters worse, the president and his legal team believe in weaponizing state prosecutions against political opponents. Not only has this government targeted former appointees who are being prosecuted on frivolous charges, but they are also prosecuting other persons and targeting business people perceived to belong to opposing parties,” he said.

President Akufo-Addo since 2018 has appointed fifteen (15) Supreme Court judges including four new recent ones, making him one of the Heads of State with the highest appointments in Ghana, only next to John Agyekum Kufuor.

Among the new appointments made by President Akufo-Addo is Justice Ernest Yao Gaewu, who was captured in a 2016 poster as a contestant for the Ho central constituency seat on the ticket of the New Patriotic Party; the ruling party.