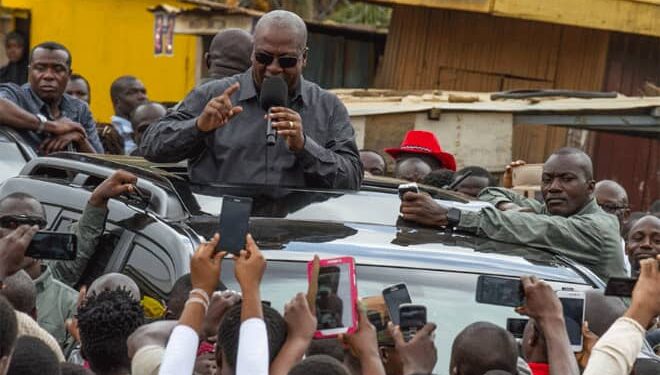 Former President John Mahama has promised to inspire hope in the country’s youth if the NDC is given the opportunity to return to power.

According to him the dire economic straits the country finds itself in, portend danger for the youth, many of whom, he says, are battling with unemployment and are fast losing confidence in the governance of the country.

“It is often said the youth are the future leaders of this country. As was said, not only this traditional area but the whole of Ghana has more than 60 of the population being young people. Unfortunately, a lot of Young people are beginning to despair for the lack of avenues for self-advancement. A lot of people finish school and for many years, they have to sit at home without employment.

Currently, our country’s economy is in dire straits. And it gives cause for despair. A lot of young people come to me and they say they don’t see why every four years they have to queue to vote. When they don’t see any change in their lives. That is why as leaders of this country, we need to sit up, because one of the most dangerous things will be for our young people to lose faith in our democracy. Once they lose faith in our democracy, and they don’t believe that our democratic governance opens enough opportunities for them, we will be in a very bad place,” he noted.

Speaking at this year’s Odambea festival of the people of Saltpond, on Saturday, the former President indicated that the NDC’s suggestions on how to save the country from the current challenges should not be construed as attempt to subvert the government.

The former President therefore urged President Akufo-Addo to turn the economy of the country around.

JoyNews‘ Richard Kwadwo Nyarko reported that Mr. Mahama also urged the Nkusukum traditional area to settle their differences and make the festivals count towards its development.