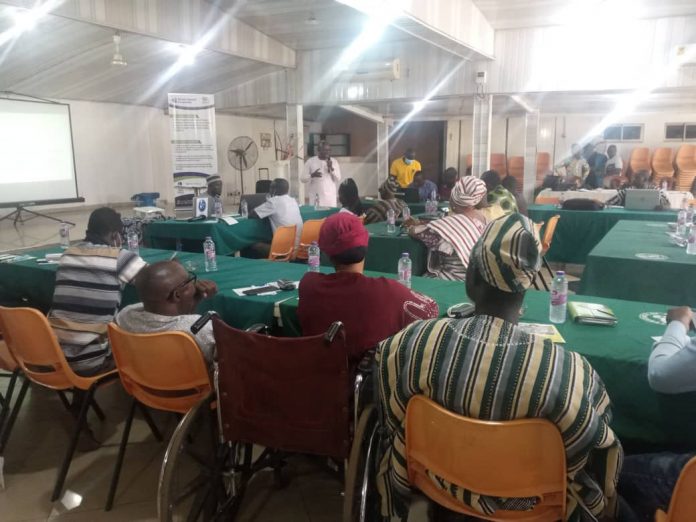 Hope For Future Generation (HFFG) and The PsyKForum held a meeting on Friday 26th August, 2022 at Tamale to review by-laws that will prohibit negative and discriminatory attitudes towards People With Disabilities (PWD’s), including Mental Health Disabilities at the Metropolitan, Municipal and District Assembly (MMDA) levels.

A number of media houses were invited including Nkilgi Fm.

Alhaj Abdul-Wahab Ibrahim who is Head of Social Welfare for West Mamprusi Municipal Assembly said they proposed some by-laws on various aspects which need review.

He said these proposed by-laws are on the aspects of education, health, transportation, media and religion, and social welfare.

They proposed that PWD’s must have a right to name, meaning that they were born and given names and therefore must be called by their names rather than attaching the disability names to them.

Alhaj Abdul-Wahab Ibrahim said they proposed some by-laws such as PWD’s must have political inclusion must at least have two government (male/female) appointments in the various Metropolitan, Municipal and District Assemblies.

They added that five (5) disabled students should at least be sponsored by the district assemblies in tertiary institutions.

They further added that all educational facilities and vocational skill training should be made available for the PWD’s including Mental Health Disabilities in the Metropolitan, Municipal and District Assemblies.

On the issue of health, they proposed that PWD’s shall have a free National Health Insurance, shall have a medical support and must not join cue when they go the health centers.

On transportation, they proposed that the Metropolitan, Municipal and District Assemblies shall make drivers provide at least 2 spaces for PWD’s at least till the time they want to take off.

On Media and Religion, they proposed that media houses mist not create programs that will be insulting to the PWD’s especially DJs putting up questions for callers to phone in.

They added that the media should use professional words and languages on airwaves about disabilities which they said they will share that with the media when they are ready.

Also, media houses should provide equal opportunities for PWD’s to air their programs, must provide an hour air time for the disabilities to discuss their issues.

They also proposed that humiliation of PWD’s in prayer camps by pastors and men of God in the name of healing them must stop and must not be cursed or demonize publicly, and also positive language must be used for People With Disabilities in congregations.