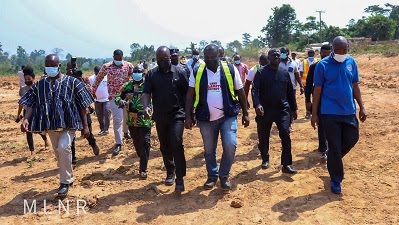 The Ministry of Lands and Natural Resources is pushing for an amendment to the law to compel small scale miners to undertake concurrent land reclamation and vegetation while excavating.
Mr Samuel Abdulai Jinapor, Minister of Lands and Natural Resources, who disclosed this, said the current law which permits small scale miners to reclaim land 30 days after excavation had given room for some to neglect their responsibility.

The result of that, he said, were large acres of degraded mined sites with government taking up the burden to reclaim it.

Inspecting a reclaimed land at Bosome Freho District in the Ashanti Region yesterday, he noted that a change in the law would enable the Ministry and Minerals Commission effectively enforce the provisions on reclamation.

Explaining why the government was funding reclamation projects, Mr Jinapor stated that small scale miners were not required by law to post environmental bonds which could have been used for reclamation purposes.

He indicated that the Ministry was also considering the establishment of a national reclamation fund to support in financing such projects.

In the meantime, he said, his outfit was deliberating the mechanism through which to establish the fund.

“We have to look at passing a new law or amending the current one to enable the establishment of the fund. This must go through all the necessary stages from cabinet to final passage,” he added.

Mr Jinapor maintained that although reclamation was a burden on the country’s finances, it ought to be done due to challenges it poses to nearby communities as well as fine-tuning the land for economic purposes.

Project Lead of Government Land Reclamation Projects, Joojo Tibu Darko, said so far 398 acres of land have been reclaimed in the area, adding that the consultant was engaging the community on the type of plant for the land.

He said a portion of the land would be dedicated towards the planting of palm trees preferably in March this year.