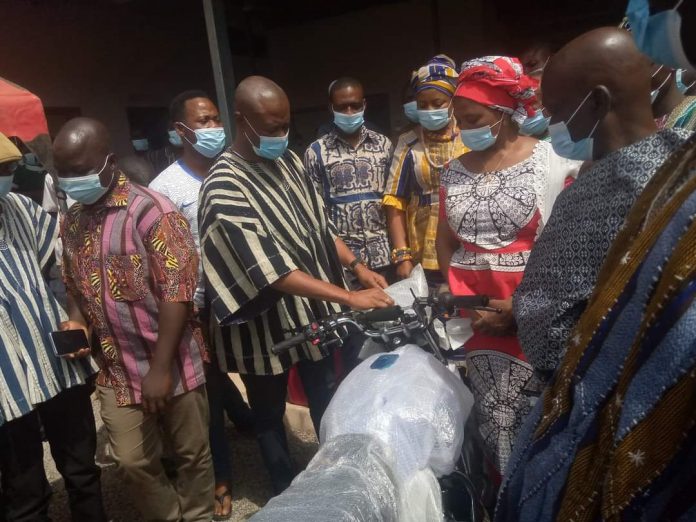 The Member of Parliament (MP) for the Bole-Bamboi constituency Hon Alhaji Yussif Sulemana and the District Chief Executive (DCE) for Bole Madam Veronica Alele Heming graced the inaugural ceremony of a polyclinic at Bamboi in the district on 20th January, 2022.

The MP addressing the gathering of Health professionals including Doctors , Nurses administrators of the facility as well as Chiefs and people of Bamboi expressed his happiness that the Bamboi polyclinic is being opened to operations and recounted how he had to push for work on the project started by former President John Dramani Mahama’s administration to continue.

The MP said the project was not a government of Ghana funded project hence he asking the Minister of Health on the floor of Parliament on 19th June, 2021 regarding the delay in the operationalisation of the facility.

The MP said he also asked the Minister responsible for Water to the floor of Parliament demanding when water would be made available to the facility to kick start operations and on the back of that, through one Alhaji Salia and Zakat Foundation water was made available to the facility on which basis the operations launch was underway. Alhaji Yussif Sulemana commended all persons who played major roles to ensure the Bamboi polyclinic starts operations and further disclosed that he has paid for National Health Insurance Accreditation to the facility should be up and running.

The MP also donated a motorbike and has deposited an amount of Five thousand Ghana cedis (GHc5000) to the Bank account of the polyclinic as seed money for its operations.

Alhaji Yussif said that he is pursuing an arrangement of a down payment of 15% government of Ghana has entered into with VW auto to provide pickup vehicles for the 6 model polyclinics some of which are located in Bamboi in the Bole District, Sawla in the Sawla-Tuna-Kalba District and Buipe in the Central Gonja district of the Savannah Region and hopes that together with the stakeholders, Chiefs and opinion leaders that pursuit can be achieved.

He added that other alternative means of acquiring a vehicle for the facility are being seriously explored.

The Bole-Bamboi MP charged staff and management of the polyclinic to work with utmost discipline and in accordance with code of conduct and in unity of purpose in seeking the healthcare and wellbeing of the people of Bole Bamboi Constituency.

Receiving the motorbike and other donations including 10 street lights and check for the seed money of GHc5000, the DCE for Bole Madam Alele Herming Veronica eulogised the MP as as her true son adding that what the MP has done a lot to push government’s effort in establishing the Bamboi Policlinic and thanked him for his effort.

The DCE in turn, handed the motorbike to the Bole District Director of Health Services Ndapewurche Hajia Fusheina Sulemana to be given to the facility.

The Bole District Director of Health Services on behalf of the facility assured that the motorbike and other donations would be put to the greater use of providing quality health care service to people in and out of the Constituency.