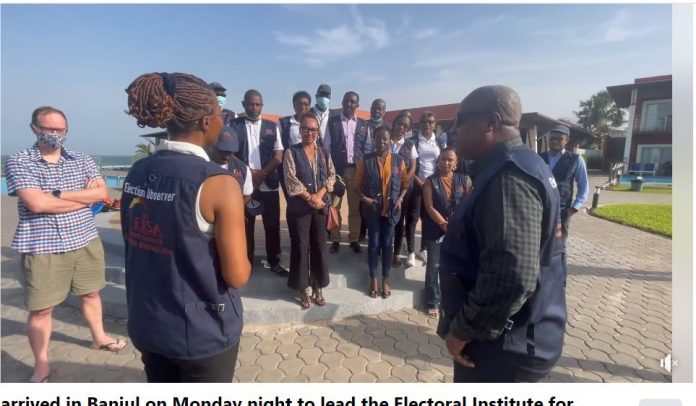 Gambia President Adama Barrow will face five challengers in an election on 4 December, the first vote in 27 years not to include exiled former leader Yahya Jammeh

The former president John Mahama has arrived in Gambia to lead the Electoral Institute for Sustainable Democracy in Africa-EISA election observer mission ahead of the much awaited polls on 4 December.

Gambians will head to the polls on Saturday to pick the country’s president, in a race that will see five challengers seeking to unseat incumbent Adama Barrow.

The country’s Independent Electoral Commission (IEC) had earlier disqualified 15 of the 21 hopefuls – including Marie Sock, the only female aspirant – for not meeting the constitutional requirements.

“I arrived in Banjul on Monday night to lead the Electoral Institute for Sustainable Democracy in Africa – EISA Election Observation Mission to the December 4 Gambian Presidential Election,” Mahama posted on Facebook.

“A while ago, I flagged-off our team of observers who are leaving to various parts of The Gambia.”

Six to stand for president in first election after Jammeh
Gambia President Adama Barrow will face five challengers in an election on 4 December, the first vote in 27 years not to include exiled former leader Yahya Jammeh, who fled the country after refusing to accept his defeat five years ago.

Barrow will be judged on his progress dragging the country out of a Jammeh era characterised by harsh political crackdowns, fear and financial plunder.

The election is being held under conditions of economic hardship after the COVID-19 pandemic kept European tourists away from Gambia’s beaches.

Candidates include Barrow’s former political mentor Ousainou Darboe, 73, as well as Essa Mbye Faal, who served as chief counsel of Gambia’s Truth, Reconciliation and Reparations Commission that chronicled the abuses of Jammeh’s rule. Also running is Mama Kandeh, who came third in the 2016 polls.

Fifteen other candidates were rejected for not meeting election commission standards.

Critics point to a rise in crime and poor electricity and internet networks. Some are mistrustful: Barrow initially said he would only serve as a transitional leader for three years but can now run for as long as he likes after a bill to limit presidents to two terms failed to pass last year.

Still, a recent programme to build 50 roads has been well received and many in the country of 2.4 million people appreciate his calm demeanour and leniency after Jammeh.