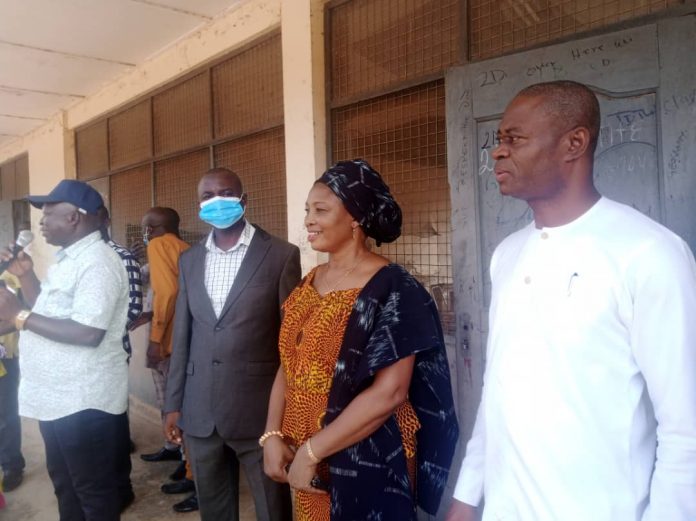 The Member of Parliament (MP) for the Bole-Bamboi constituency Alhaji Yussif Sulemana, the District Chief Executive Madam Veronica Alele Heming and officials of the Ghana Education Service have visited the Bole Senior High School exanination Centre for the Basic Education Certificate Examination (BECE) candidates in the district on 15th November, 2021 as the the examination commences.

The MP for Bole Alhaji Yussif Sulemana in a brief interview with Bole based Nkilgi fm during his visit encouraged the candidates to put up their best since they shall inherit the future.

The DCE for Bole Madam Veronica Alele Heming speaking at the Bole SHS appealed to the candidates not to engage in any exam malpractices since that could jeopardise their future.

In an interview with Bole based Nkilgi FM the DCE disclosed that the government will feed all candidates throughout the five days period of the examination and will also provided pens for the examination. She appealed to all stakeholders to be modest in handling the candidates.

In a brief opening ceremony at the Bole SHS to officially commence the exam, the Bole District Director of Education Mr Yahaya Sulemana commended the pupils and teachers for adequately preparing for the examination. He said the journey of the academy ladder starts at the BECE, hence they should focus with determination and make the Bole district proud.

He used the opportunity to appeal to teachers, students, invigilators, examiners to reframe from examination malpractice.

Madam Veronica Alele Heming and Mr Yahaya Sulemana also proceeded to the Bamboi Community Day School exanination Center where the DCE in an address recounted her days as a BECE candidate in 1969.

She tasked candidates sitting in for BECE to take advantage of the government’s flagship program, Free SHS and make it into the second cycle institution.

She said with determination and hard work, the candidates can become the future MP’s, DCE’s, Ministers and Presidents as the students are the future leaders of the country.