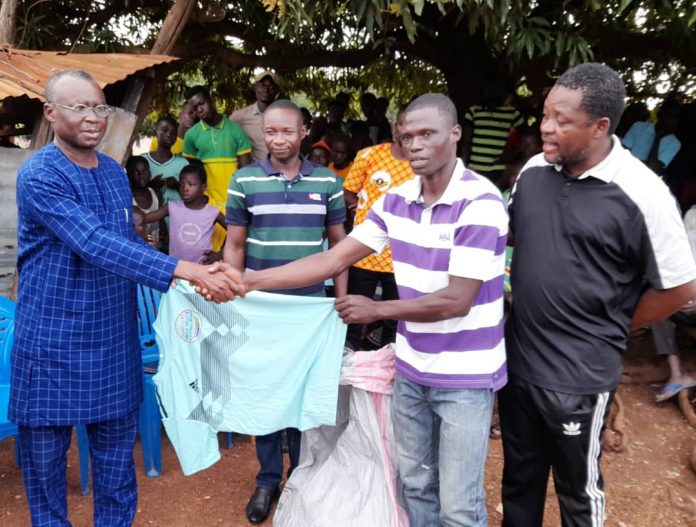 Few weeks back, a team (Naamu Fit FC) from the Savannah Region precisely the East Gonja Municipal on its first attempt defied all odds to qualify for the sub-middle league.

Naamu Fit FC made it’s entry through the Bimbila Zone and made it to the top.

The feat chalked took them to the next stage where they played with teams like Sankara National of Yendi, Sunkuli Stars from Wulensi and Yendi United all from the Yendi Zone.

The former MP for the constituency Hon. Salifu Adam Braimah donated two separate Jerseys with an undisclosed cash to augment their activities.

In a short address, the former MP confessed his excitement upon hearing the good news and urged them to continue making Savannah Region proud.

“It’s my utmost hope that someday youngsters from this team will play in the national team and beyond”; Hon. Salifu Adam Braimah added.

The coach of the team, Mr. Moses Baba Debezee on behalf of the people of Naamu and the team applauded the former MP for the kind gesture and promised to ensure that the team rise to the highest pinnacle.

He drew the attention of Hon. Salifu Adam Braimah and his entourage to the great talents in the Municipality and further pleaded with him and other stakeholders to try as much as possible to help them rise.

Elders of the community also took their turn to thank Uncle Sally as he is affectionately called for being there at all time for them.