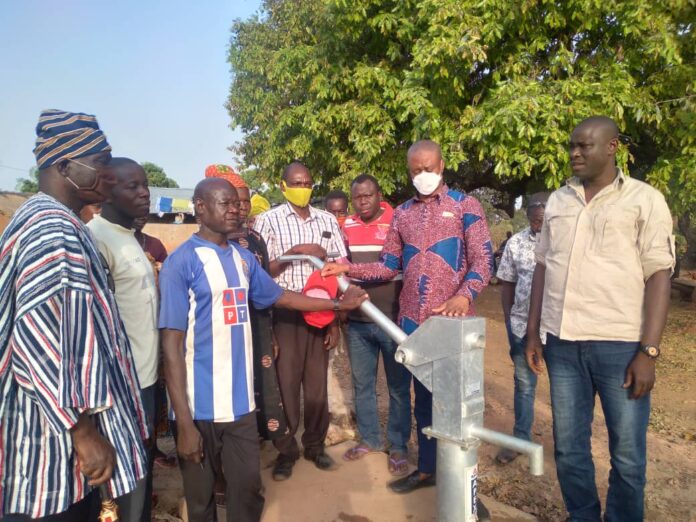 The Member of Parliament (MP) for the Bole-Bamboi Constituency of the Savannah Region Hon. Alhaji Yussif Sulemana handed over 3 hand pumping boreholes in three communities on Thursday, 25th February, 2021.

Speaking to Bole based Nkilgi Fm, the MP Hon. Alhaji Yussif Sulemana said he on behalf of John Dramani Mahama promised the people of the said communities who have been suffering from lack of water boreholes and has fulfilled the promise.

The MP added that he had earlier handed over one hand one pumping borehole to the Carpenter community in the Constituency in December 2020 making it four boreholes constructed and handed to the respective communities.

The Chief of Gbilimpe, Gbilimpewura Sarfo Amantana on behalf of the chiefs for all the three communities thanked former President John Dramani Mahama and the MP for the good gesture, and also pleaded with the MP to help construct their road and also get them connected to the national electricity grid which he said is key challenge to the people of Gbilimpe.

Chief Sarfo Amantana said the people in his community will continue giving their support to former President John Dramani Mahama and the MP Hon. Alhaji Yussif Sulemana because all their promises to them have been fulfilled.

The National Democratic Congress (NDC) Women organiser for the Gbilimpe branch under the Kwame Kwesi Electoral Area, Madam Agnes Bayor also thanked John Dramani Mahama and the MP for that kind gesture. She said they were promised that they will have portable drinking water after they have cried years for that and it has come to pass.

Madam Agnes said what made her more excited is that the borehole is located in the school of the community since it will help their school wards as the suffer to get water to cook for the pupils and also for them to drinking.

The Assemblyman for Kwame Kwesi Electoral Area Hon. Gilbert Andrews told Nkilgi Fm that, Hon. Alhaji Yussif Sulemana promised them and even told them after elections, either he wins or not, he will construct the boreholes for them and truly after the elections, the communities all have had their boreholes.

He added Bombomte and Dikpa were initially given Tricycles (motor Kings) to convey their pupils to school at Kwame Kwesi.