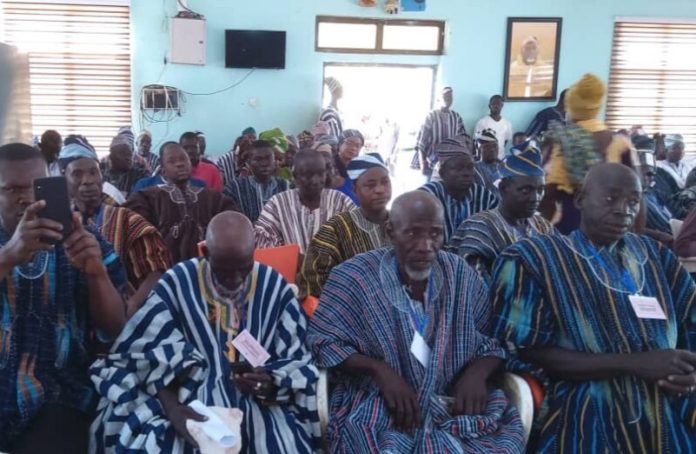 Tne King and Overlord of the Gonja Traditional Area and President of the Gonja Traditional Council Yagbonwura Tuntumba Boresa (I) has appealed to the chieftaincy institution in the region to take decisions that will promote peace, enhance culture, tradition and be agents of for development by promoting sociocultural affairs to be able to restore and place premium value on chieftaincy to the rest of the world.

Meanwhile, the Yagbonwura has assured the Chiefs and people of Gonjaland that the Gonja Traditional Council will by the end of the year resolve and write off all pending matters of chieftaincy and land related challenges in the Kingdom to enhance
peace and tranquility and to also bring about agricultural development and effective education which will bring investors to the land of the Savannah Region.

Mr Mohammed Amin further expressed their happiness with the response of the chiefs, saying their concerns are about the review of the constitution of the Gonjaland traditional council and some land boundary issues in the kingdom, which he said has been highly accepted and welcomed by the highest decision making body of the Gonja kingdom.

He also put before the council the separation from the Savannah Region House Of Chiefs from the Gonja Traditional Council that has Mr Abutu Kapori acting as Registrar of the two.

He emphasized that even in law, it is not advisable to have one person occupying the same position hence that issue must seriously be looked into.

The President of the Gonjaland Youth Association commended the Gonja Traditional Council for their prompt response to issues the Associationput before them disclosing that one of their concerns is about the review of the 1930 Constitution of the Gonja state which is being looked into.

The Gonja Traditional Council is scheduled to fix a new date for another meeting since it was agreed that the committees set to look into some of the critical issues in the Kingdom should be dissolved and reconstituted.

A report presented by a committee formed to probe into the actions of the Gonjaland Youth Association in mankuma regarding a video which circulated on social media purported to some happenings in the kingdom was nullified by some council members which calls for the formation of a new committee to probe into the issues.