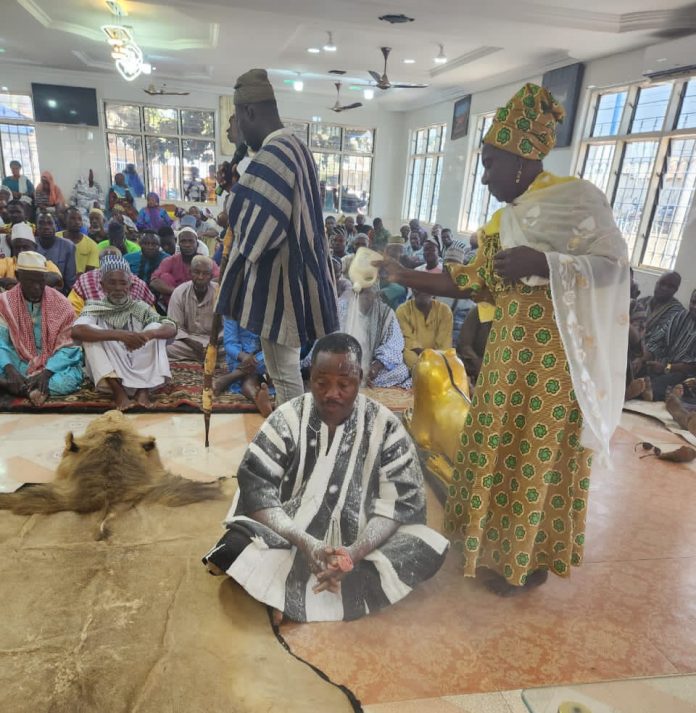 The Paramount Chief of the Buipe traditional Area of Gonja, Buipewura Abdulai Jinapor (II) has expressed his commitment to upholding in high-esteem the tenets of culture and tradition of Gonja and will as well help promote peace in the Gonja Kingdom.

The Buipe Chief in his quest to appreciate and honor heroes of Gonjaland, has advance plans to designate sections of his traditional area to named after historic places persons who served the kingdom diligently to the admiration is generations.

As part of this commitment to achieve this course, Buipewura on Thursday, December 28, 2022 enskinned Mandewura Alhassan Abdulai Boresapo (I) to see to the traditional administration of Mande.

Mandewura Alhassan Abdulai Boresapo (I) was subsequently outdoored in a colourful event on 30th December 2022, attended by Chiefs and Queenmothers of the Buipe Traditional Area at the the palace of Buipewura Jinapor (II).

Mande, the newly designated suburb in the Buipe township is named after the ancient Mande where the Gonjas historically migrated from in the 14th to 15th century.

Meanwhile, the leadership of the Gonjaland Youth Association (GLYA) led by their President Lawyer Alhaji Osman Mohammed Amin called on Buipewura Jinapor (II) on 30th December, 2022 at the request of the association.

The visit was to seek clarification and discuss issues pertaining to the Buipe Traditional area.

The Buipewura used the opportunity to welcome the delegation to his Palace and assured them of his continues commitment to peace and development of his traditional area and the entire Gonja kingdom.

Jira Buipewura Jinapor (II) used the opportunity to introduce the newly outdoored Mandewura from the Chinchinko gate who was enskinned as the substantive chief of Mande (a suburb in Buipe).

On the allegation of allocating a very large parcel of land exclusively to Fulanis, the Buipewura clarified the allegation as untrue, unfounded and baseless referring to records available at the Buipe Tradtional Council and the Buipe lands secretariat to back his prove.

The Buipewura further reiterated his position to welcome all well-meaning citizens irrespective of their tribal, religious, or political affiliation on his traditional area for development and mutual benefit.

The Paramount Chief of the Buipe traditional area admonished all Gonjas, particularly the youth, to eschew violence and rather adopt dialogue which will continuously promote peace toward resolving grievances.

He further called on all indigenes and residents of Gonjaland to close their ranks and unite to enable the Kingdom overcome the numerous developmental challenges confronting her people particularly declining educational standards.

Buipewura indicated that he continues to be unflinchingly committed to the unity, peace and total progress of the Gonja Kingdom and will dedicate his life towards the realisation of these noble aspirations.

The Buipewura donated an amount of GHc20,000 to support the movement of the Gonjaland Youth Association across the region.