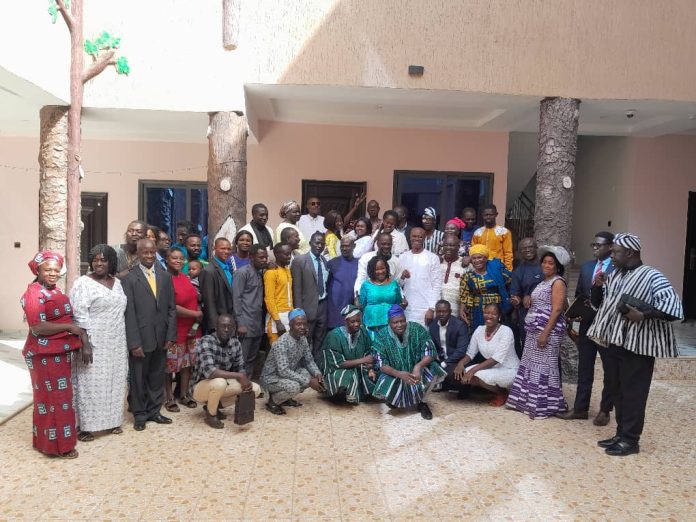 The Chairman of the Bole Local Council of Churches Rev. Adams B. Seidu has described the Member of Parliament for the Bole-Bamboi Constituency Alhaji Yussif Sulemana as a great friend of Christians in the constituency adding “the MP has always acknowledged Christians and every year have meetings with us, celebrate Christmas with us, give us gifts and in recent times gave us streetlights to lighten around our churches.

Rev Adams added; “The Bole MP has helped us to be able to secure anti snake venom which is being kept at the Martyrs of Uganda Health Center in Bole and we have achieved a lot things with MP”.

Rev. Adams B. Seidu said the entire Local Council of Churches with the enlightenment given at the meeting by the MP has now come to the realization of what the MP is doing for them and what he is doing in parliament for them.

The Chairman of the Bole Local Council of Churches prayed for the MP and urged him to continue doing his good works for the people of the Bole-Bamboi Constituency.

He said “may his days and life expands and may he grow beyond the the limitations of even himself”.

He said the Local Council of Churches have raised a lot of Concerns about uncompleted projects in the Bole District.

Alhaji Yusif Sulemana said he met with the District Coordinator and the District Chief Executive (DCE) for Bole and what he was told was that the Bole Senior High Dinning Hall’s Contractor who was in charge of the contract has not been paid and he refused to handover the keys to them.

He also said that the Local Council of Churches also spoke about how patients are be treated by nurses and he said they need a stakeholder engagement to settle that.

The MP for Bole-Bamboi Constituency spoke about the “Pompigbo” which is an irrigation dam in the Bole township, saying he spoke to the DCE and she said they wanted funding from an NGO to work on it and God willing they got a funding partner and the dam which health split the Bole to Kumasi road has been worked on.

Speaking on his work o the floor of Parliament, Alhaji Yusif Sulemana said anybody can find out from anyone in the Savannah Region. “They they all know every question or submission I make in parliament benefits or impact our people positively in the Bole-Bamboi Constituency and Ghana at large”.

Speaking on the National Cathedral of Ghana being sponsored by governmentof Ghana, the MP said he is part of the committee which is formed to hold the national cathedral agency accountable.

He added that if the MP gets money to build a church or cathedral, he will galdly do so but just that he doesn’t support the building of the national cathedral now because so much of the tax payers money is being spent on it at a time Ghana is in serious financial difficulties

Ahaji Yusif Sulemana said the money already invested into the construction of the National cathedral is too huge but it is still at the foundation level.

He said he is a very serious worshiper of God and will not do anything to incur the wrath of God and hence will be the last to speak against the construction of the house of God, but he is against the construction of the National cathedral because we are not in normal times and the people of Ghana are in serious hardship, and so cathedral shouldn’t be the priority of the government at this moment.

The Bole MP said said when he was speaking against the national cathedral in parliament, he was thinking about his men of God in the Bole-Bamboi Constituency and how the will understand his submission about the cathedral and God willing he is before them to explain to them why he chose to stand against it.

He said some people want to use the name of God to swindle poor taxpayers money.

Alhaji Yusif Sulemana also spoke about the Liquefied petroleum gas (LPG) and that he himself was ready to open a Gas filling station, but the National Petroleum Authority (NPA) hasn’t started issuing licenses yet.

The MP for Bole-Bamboi also spoke about Fulani herdsmen staying he suggested to the chiefs that anyone’s farm which is been destroyed by cattles, all Fulani’s in the area should bear the cost.

Alhaji Yusif Sulemana concluded by urging the Local Council of Churches to continue praying for him and other stakeholders for long life.