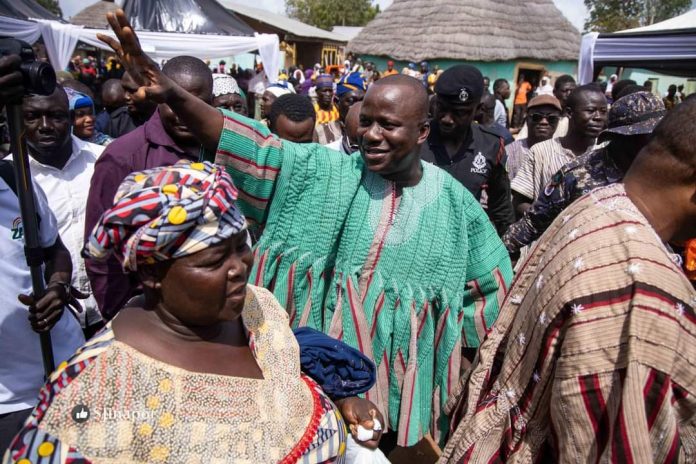 Mr Kiyoyo in his assessment of the Damongo MP’s performance indicated that water, which is the main problem of the people of Damongo is still a serious concern even though that was the major campaign message of Hon Jinapor.

Speaking to Bole based Nkilgi Fm’s morning show on 22nd December, 2022, the NDC Communication Officer added that the Two Astroturf Pitches constructed in Damongo and Larabanga are never the achievements of the MP but an initiative of the Zongo Development Authority which the MP is unduly taking glory for.

Mr Kiyoyo said in the MP’s days as the Deputy Chief of Staff, he made Kenkey sharing his campaign tool and has engaged in rice sharing even as at now.

He said the Damongo weekly market as at now is under construction with monies shared among market women in a form compensation which according to Kiyoyo is never from the MP but from government.

Mumuni Kiyoyo claims almost all projects ongoing in the constituency as government initiatives but not from the MP.

He used the opportunity to appeal to the rank and file of the NDC to come together in unity in order to win the seat back.

Meanwhile NPP Communication Director of the New Patriotic Party (NPP) Mr Iddrisu Lamin has rubbished everything said by Mumuni Kiyoyo Kiyoyo, adding that Hon. Jinapor has done exceptionally well in his two years in office in all aspects of development.

He saie for Mumuji Kiyoyo to compare a two year in office of an MP to 12 years in office of Hon Ablakwa, Hon Afenyo Markins, Hon Yussif Sulemana and other members of parliament without remembering to mention his own former MP Adams Mutawakilu Garlus tells it all that the Damongo constituency under the former MP really suffered interms of development.

He said; “If Kiyoyo can attribute the construction of bridge and Fufulso Sawla road as projects of the former Member of Parliament but qick to mention that projects such as the Astro turf, Damongo community center, Damongo weekly market among others cannot be attributed to Hon Jinapor then he donated know the sort of politics he is doing”.

Iddrisu Lamin indicated that if it was not a crime to share maggi cubes to constituents under the former MP, he sees it as a plus distributing kenkey and rice to constituents and therefore urged Mumuni Kiyoyo to give credit where it is due since Samuel Abu Jinapor has fulfilled the 6 key developmental areas he promised the people of the Damongo Constituency which includes job creation, women empowerment and so on.

On the Damonho water project, Mr Lamin said the Damongo Constituency MP is never sleeping and has resolve to do whatever to provide portable drinking water to the people of Damongo and it’s environs.

Iddrisu Lamin assured the people of the constituency that water will flow under the tenure of the Damongo MP and used the opportunity to call for a debate between himself and Mumuni Kiyoyo on Bole based Nkilgi FM for listeners to know what is on the ground in the constituency.

Iddrisu Lamin said the Damongo weekly market, the Damongo community center among other projects will soon be handed over to the people and the water project too by the grace of God will kickstart.

The NPP communication Director also appealed to the people of Damongo to remember the Damongo MP in their prayers as he is doing everything possible to get water for Damongo.

The NPP communication Director for Damongo constituency concluded by inviting Mumuni Kiyoyo for a debate to compare the performance of the former MP and the current MP sector by sector, and believe that under the 4th republic, Hon Abu Jinapor in Damongo constituency has performed better in his two years than any other MP in the constituency as a result he will rate him 99.5%.