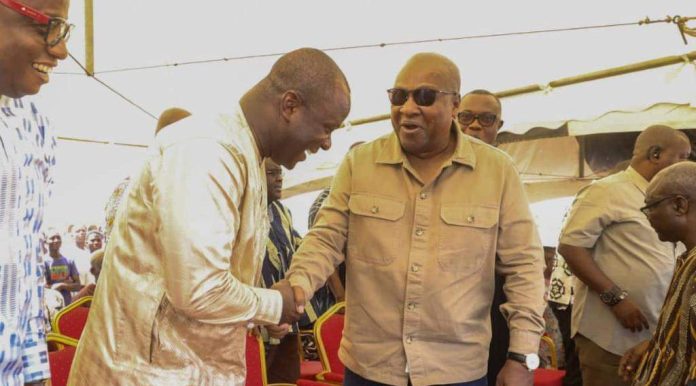 Former President John Dramani Mahama has urged the people of the Savannah Region to always come together after elections and work towards one common goal despite their different political backgrounds.

Former President John Dramani Mahama called for unity among the people so as to push for development for the Savannah Region.

John Dramani said the people of Southern Ghana see all people of the north as one nd theredore call the. “Ntafo” which means twins and which for him is good word but unfortunately the people don’t see themselves as such and tend to divide themselves.

Former President John Dramani Mahama made these comments at Sawla in the Sawla-Tuna-Kalba District of the Savannah Region on 28th November, 2022 when he attended the final funeral of his Sister Hajia Siata Bakari, who also happens to be the mother of the Savannah Regional Chairman of the National Democratic Congress (NDC), Alhaji Imoro Seidu ‘Man Blessing’.

Hundreds of people attended the funeral of Hajia Siata Bakari who passed on, on 19th October 2022 at Sawla. The dignitaries included a delegation from the Republic of from Côte d’Ivoire led by the Deputy National Chief Imam of the country and a Ghana government delegation led by the Minister of Lands and Natural Resources Hon Samuel Abu Jinapor, the Savannah Regional Minister Mr Saeed Muhazu Jibril and Municipal and District Chief Executives.

There were many Chiefs and Queenmothers from the various Traditional areas in the Gonja area as well as political party executives from both the National Democratic Congress (NDC) and the New Patriotic Party (NPP).

Speaking at the funeral in Sawla former President John Dramani Mahama said the most significant element that benefits dead person is the prayer which the Deputy chief Imam of Cote d’Ivoire, Sheikh Moro Musah Kawamdeen and some Imams in Ghana have led performed.

John Mahama added that it is good to exhibit a good attitude and character which has been shown in Alhaji Imoro Seidu and the mother that made many dignitaries both nationally and internationally to be in Sawla.

Former President John Dramani Mahama through the MP for the Bole-Bamboi Constituency donated five bags of rice, a gallon of cooking oil, and an amount of GHc10,000. (100 million old cedis).

The National Chairman of the NDC Mr Samuel Ofosu Ampofo on behalf of the entire NDC paid a tribute to Alhaji Moro and the family for their loss.

He said it looks like a conspiracy between himself and Alhaji Imoro to organise the funerals of their mothers two days apart as he organised his mother’s funeral before Hajia Siata’s funeral ceremony on Sawla.

Ofosu Ampofo said that it is his prayer that the good lord will grant them paradise in heaven and peace.

Chairman Ofosu-Ampofo said he and the entire NDC associates themselves with Alhaji Imoro who happened to be one of the hard-working regional chairmen in the NDC fraternity in Ghana. He commended Alhaji Imoro for his hardwork and full dedication to the the NDC party and that is why he is called Chairman ‘Bulldozer’ because of his hardware work.

He prayed on behalf of the NDC that God use death of Hajia Siata Bakari to bless the NDC to help John Dramani Mahama back to power.

Speaking at the funeral Hon Samuel Abu Jinapor said it was a high esteem to be part of the final funeral right of Hajia Siata, the mother of the Savannah Savannah Regional NDC of the chairman to indicate a sense of oneness and unity despite the political differences.

Hon Jinapor said looking at the many people that attended the funeral, it shows Hajia Siata was a good woman and a mother to all. He implored all in the north and the savannah region to demonstrate unity in political diversity for growth and development.

Samuel Abu Jinapor entreated everyone to help make the Savannah region become a different region among the sixteen regions in Ghana by collaboration for development.

He said Savannah Region should celebrate unity in diversity because “we are one people whether NDC or NPP”.

Hon Jinapor said in the southern Ghana, the people understands politics and do away with hatred after elections and pave way for development. He said that during the 2020 elections campaign, Alhaji Imoro did serious politicking in the Damongo constituency against the NPP yet he is a good man.

The NPP donated ten bags of rice, a gallon of rice GHc5,000 to support the funeral and GHc2000 to the Imams.

She said;
“I stand to read a tribute to our beloved grandmother on behalf of the children and grandchildren. I would love to make a quote from the glorious Holy Quran chapter 20 verse 55: thereof we created you and into it, we shall return you and from it, we shall bring you all to once again. When the people you lane on for support are no more, it feels the whole World is against you. All hope seems lost. Indeed death is inevitable and verily, every soul shall taste death”.

Imoro Zeinab added;
“We will deally miss you grandma but your spirit and strength lives on each of us and the lives you touched. You are unique grandma and your care and love was not just for your children and grandchildren bit every single soul that crossed your path”.