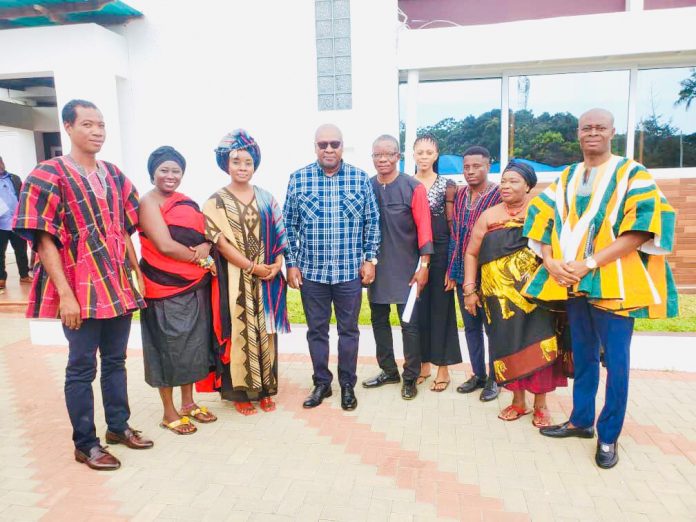 Former President John Dramani Mahama today 9th November, 2022 received the family of the late Mr Christopher Mawulolo Kofi Glavee at his office in Accra. The delegation was joined by the Member of Parliament (MP) for the Bole-Bamboi Constituency Alhaji Yussif Sulemana.

The late Mr Glavee who was the first modern Fuel station (Mobil) Manager at Bole even though an Ewe from Atiavi Ewe was close to former President John Dramani Mahama and his family at Bole where he (Mr Glavee) stayed for about 35 years and contributed a lot to the development of Bole.

Mr Glavee was partly responsible for the success of many Bole young men in business at the time.

Speaking to the family members former President Mahama recounted how Mr Glavee as the only fuel station Manager used to hoard fuel especially for him those days at Bole where there were usual fuel shortages.

Mr Mahama said the late Glavee was also a Patron of the NDC back in the 1990’s in the Bole-Bamboi Constituency, his personal adviser and a supporter of his campaign anytime he was running as MP for Bole- Bamboi beginning in 1996.

John Dramani Mahama said the funeral is also his funeral and he should have joined the family to be inviting people to Atiavi in the Volta Region.

The funeral arrangement of the late Mr Christopher Mawulolo Kofi Glavee is as follows:

Saturday 3rd December, 2022- Burial Service start at 9:00am followed by Interment at 11:00am and other Funeral Rites at same venue.