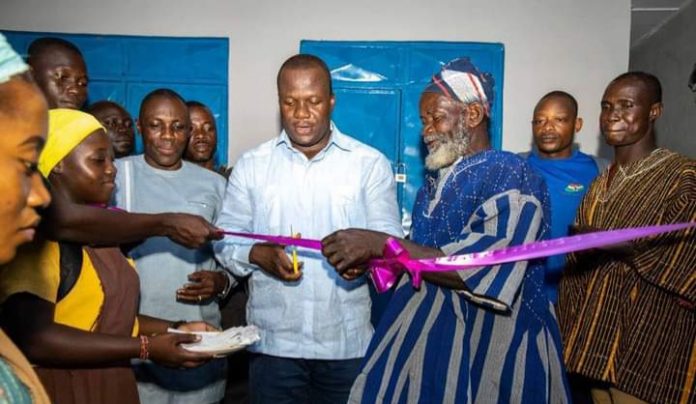 The Member of Parliament (MP) for the Damongo constituency and Minister for Lands and Natural resources Samuel Abu Jinapor has disclosed to the people of the Nabori community in the Damongo constituency that one of the five universities known as the Science, Technology, Engineering and Mathematics (STEM) Universities that are to be built in five of the newly created regions in the country including the Savannah Region would be situated in Nabori near Larabanga in the West Gonja municipality.

Hon Abu Jinapor disclosed this to the people of the community when he commissioned a 3-Unit classroom block for the Nabori community on Saturday 8th October 2022.

Addressing the community at a short ceremony to officially hand over the completed block to the community, Mr Samuel Abu Jinapor said a lot is in the pipeline for the development of the community.

He said a Kindergarten and a Junior High block construction will begin soon as the newly constructed 6-unit block was constructed at the time the assembly man for the area and the municipal chief executive had to draw his attention of the danger posed by the old classroom block that was becoming a death trap for both teachers and pupils of the Nabori community school which he is happy to be commissioning the new block he has provided to the community.

Hon Samuel Abu Jinapor indicated that he has plans to also build a health center for the people of the Nabori community.

He used the opportunity to thank the people of the Yipala-Nabori electoral area for the opportunity given him to serve them and asked for the continues prayers from the chiefs and religious leaders of the community.

The Municipal Chief Executive (MCE) for the West Gonja Municipal Assembly, Mr Karim Musah Kusbari in an address commended the MP for Damongo for his timely intervention since the old structure was a death trap that never saw renovation and was at the verge of completion.

He said apart from the building, the member of Parliament has also helped in securing job opportunities for some of the youth in the community which he is sure will change the lives of the beneficiaries with some more employment opportunities also in the pipeline.

Hon. Abdul-Rahman Balori, Assembly man for the Yipala-Nabori electoral area on his electoral area thanked the the MP for Damongo for his contribution towards the development of his area.

He also used the opportunity to thank the MCE for the West Gonja Municipality for the role he played in making sure the dream of the community is realised.