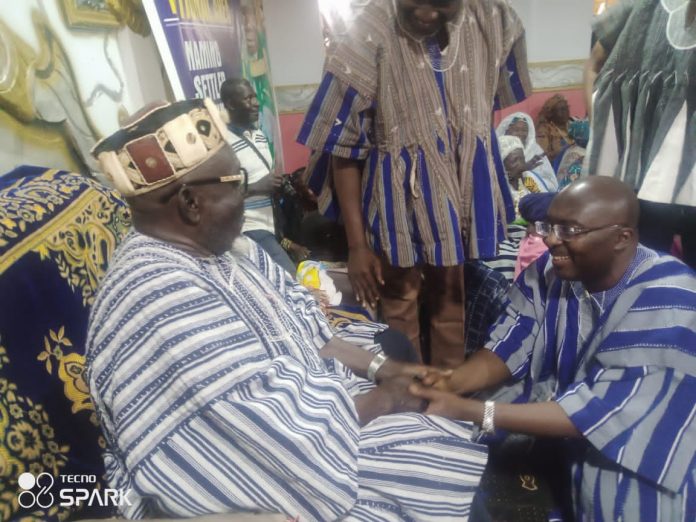 The Paramount Chief of the Bole Traditional Area, Bolewura Sarfo Kutuge Feso (I) has told Vice-President Dr Mahamudu Bawumia that victory in whatever he is doing is a forgone conclusion.

He added;
“Take that sentence from this place. Your victory is a foregone conclusion”.

The Bolewura made these comments when the Vice President of Ghana Dr Mahamudu Bawumia paid a courtesy call on he (Bolewura) and his Chiefs at his palace on 10th October, 2022.

Meanwhile delivering the Bolewura’s welcome address on his behalf, his Secretary Mr. Abdulai Haruna Obey presented some challenges confronting the Bole traditional council and the district as a whole.

He said the Bole traditional council lack a pickup which is making work for the secretariat difficult and they have to rely on the use of motor cycles in most cases.

He added that the entirety of the Bole district wants to create the indulgence of the Vice-President on the application submitted by the Bole DCE requesting for upgrade the Bole district Assembly to a municipal assembly status.

The Bolewura’s speech also reminded the Vice-President of the request the Member of Parliament (MP) for Bole-Bamboi constituency submitted to the office of the Minister for Local Government, Decentralization and Rural Fevelopment Hon. Kweku Botwe as to the upgrading of the Bole district assembly to a municipal assembly.

Bolewura said sports is part of the development of the youth and he and his people are relying on the government at all times to help develop sports in his area.

The Paramount Chief of the Bole Traditional Area referred the Vice-President to the local government act 2016 (ACT 939) section 4a ii which provide for the mimum population of 95,000 people before a municipal assembly can be created.

He added that by the provisional result for the 2020 population and housing census that the current population for the Bole district is about 115,800 people which is above the required figure.

The Vice-President said he was in Bole to commission the one district one warehouse project and a market project.

He said from Bole they would go to Tuna to commission a water project.

Dr Bawumia said he has heard the challenges facing the people of Bole and one major one is the upgrading of the Bole district to a municipal status.