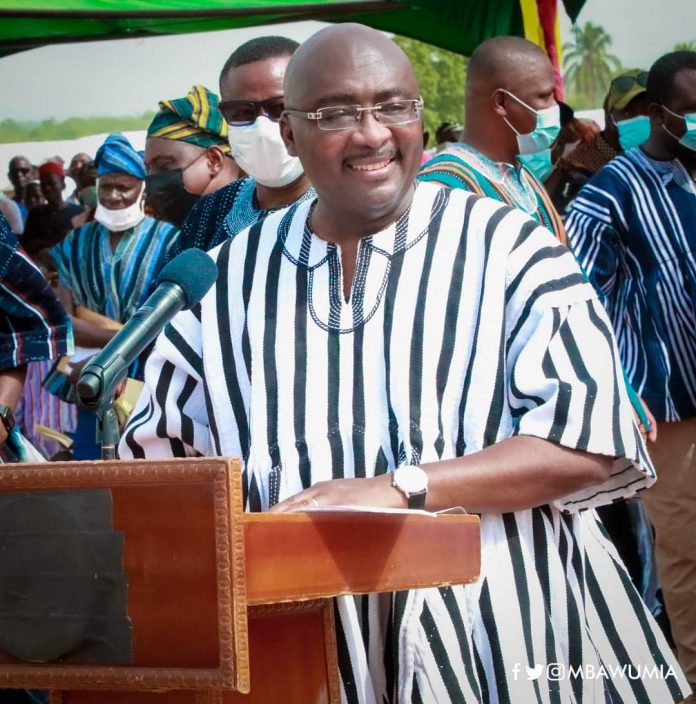 A writer and staunch member of the National Democratic Congress (NDC) in the Savannah Region Mr Issifu Seidu Kudus Gbeadese has formally welcome the Vice President Dr Mahamudu Bawumia to the Region as he campaigns to canvas for votes to be President of Ghana Come 2024, but reminded him of the outstanding arrears of promises made to Savannah Region in the past.

In a write-up on 9gh October, 2022, copied to Bole based Nkilgi Fm, Mr. Issifu Seidu Kudus Gbeadese said the Vice President Dr Mahamudu Bawumia’s message is a reminder and largely a rehash of  failed promises and empty sod-cutting ceremonies  which his boss President Akufo-Addo conducted in Gonjaland (Savannah Region) taking over the reigns of government in January 2017.

According to him, these are hard times as Ghanaians as we  wallow in real economic hardships.

Kudus Gbeadese said he genuinely empathized with the Vice President, given the case that he has run down the economy with  unrealistic policies, recklessness and conspicuous incompetence, coupled with the fact that the Alan camp is using that as a scorecard to foil his bid to stand.

Also, he said; “in times like this, one should expect and appreciate your current posture. So, it is understood that you want to prove a point and to be seen working. Your lamentations in Northern Region is a clear testament of how frustrated you are in these times”.

Furthermore, he said; “I want to remind you and President Akufo-Addo of the outstanding arrears of promises and projects in Savannah Region you either cut sod for or openly promised of their timely execution amidst loud applause from our people”.

He reminded the Vice President Dr Mahamudu Bawumia that; “Right before the skins of the King of Gonjaland, Yagbonwura Tuntumba Boresa (I), in 2018, you, Dr Bawumia, promised that the Damongo water project was going to start that same year with a seeming unequivocal disclosure that your government had secured the funding for it” and “following  closely to this, your boss himself, President Akufo-Addo, upon a visit to the Jakpa Palace somewhere 2019, disclosed that some $49m had been secured from the UK Export Finance and Deutsche Bank AG, for the purposes of constructing a water supply system for Damongo and its environs. He ended by promising that a month after his visit, contractors will start work on 10 mechanized boreholes as a stop-gap measure while we wait for the main water project. As I write this, not even a single hand-pump borehole has been drilled to that effect. Even the existing boreholes are begging for maintenance”.

Mr. Issifu Seidu Kudus Gbeadese added that, as a way of giving the people of Damongo some false hopes in order to get their votes in 2020, President Akufo-Addo who was ably supported by Hon Abu Jinapor, came to cut sod for the supposed commencement of works on the Damongo Water Project on 29th July, 2020. This program was staged at the Damongo Town Park and not the project site as it is the standard practice. And they did so without any contractor on site and no machinery to showcase as a commitment. We were told the project will take 24 months to be complete—it’s been well over 26 months without a single pipe on the ground to show for the President’s pledge. As for the subsequent fake promises made by Hon. Samuel Jinapor and his Bible quotations to back his deceit, we have lost count”.

He said, “the Vice President, as a way of reminder, exactly two months after the sod-cutting for the Damongo Water project, precisely on the 24th September 2020, you came to stage another deceit of a sod-cutting for the commencement of work on the so called Savannah Regional House of Chiefs Office Complex. As I write this message, not even a single block has been laid for the said project. While cutting the sod, you indicated that your government within three years of being in office, had initiated 785 projects for Savannah Region alone and had at the time completed 630 of them. Was that supposed to be a joke or you people as usual added 12 unit KVIPs as monumental projects?”.

Issifu Seidu Kudus Gbeadese said; “another disturbing deceit was staged at the 45th Gonjaland Youth Congress in Bole, specifically on the 6th of April, 2021. Mr Vice President, you looked in the faces of the chiefs and people of Gonjaland and solemnly promised that the Daboya bridge project was going to commence in August 2021. Could that be the reason you dodged the annual Gonjaland Youth Congress in Daboya, this year, 2022?”.

He asked; “Mr Vice President, I should believe that the MP for Daboya/Mankarigu Constituency who also doubles as the Deputy Minister of Health and the DCE for the North Gonja District, will be part of your entourage to the Jakpa Palace as you campaign. I wish they will be able to tell you the truth, but in case they would not, may I beg to speak on their behalf and on behalf of the Chiefs and people of Wasipe?

Kudus said; “Also, the road linking Busunu to Daboya has been partly wiped off by heavy rains and flooding from the Tachali river. In case you don’t know or forgotten, that road project which was started by HE John Dramani Mahama. Your government abandoned it for almost 6 years now, leaving the people to suffer in its current state. The livelihoods of thousands of our people especially women, within that enclave have been cut at the throat without any hope in sight”.

Issifu Seidu Kudus Gbeadese added; “Again, on the 3rd of February 2020, President Akufo-Addo at an event in Kpalbe, promised the good people of the East and North-East Gonja that the 138km Tamale-Salaga-Mankango road was going to be completed in 18 months beginning February 2020. If I can still remember my 2/4 maths well, it’s been 32 months now and there is no show. In fact, that road is still one of the worse roads during rainy days. Still, at the same event in Kpalbe, the President promised the people of North-East Gonja the following: A District Hospital at Kpalbe in the North-East District. a Senior High School in the North-East District. And a small town water project in the same District.
Indeed, after 32 months since these specific promises were made, nothing is there to show for same”.

He said in the midst of these deceptions, most projects that former President John Mahama initiated have either been abandoned or executed in a slow pace and mentioned the 60 bed Salaga Hospital; the teacher training college in Bole; the Busunu-Daboya road project; the E-block at Kpalbe in the North-East District; the Mpaha-Debre road and a host of others, have either been abandoned outright or been executed sluggishly.

Issifu Seidu Kudus Gbeadese said; “I wish to convey to you, Your Excellency, is the fact that the $10m Buipe Sheanut Factory with about 40,000 capacity, which was built by HE John Dramani Mahama, to add value to our Sheanuts and to give sustainable jobs to our youth, has been grounded for more than two years today without hope of revival. The irony is that, this happened at the same time that your government is trumpeting yet another directionless slogan of 1D1F. Could it be deliberate to deny the youth of Gonjaland and the North at large decent but sustainable jobs while at the same time denying our mothers who painfully pick these sheanuts, their livelihoods?

He said; “Maybe God will touch your heart to at least show some concern, although we know you are engrossed in your campaign than in governance”.