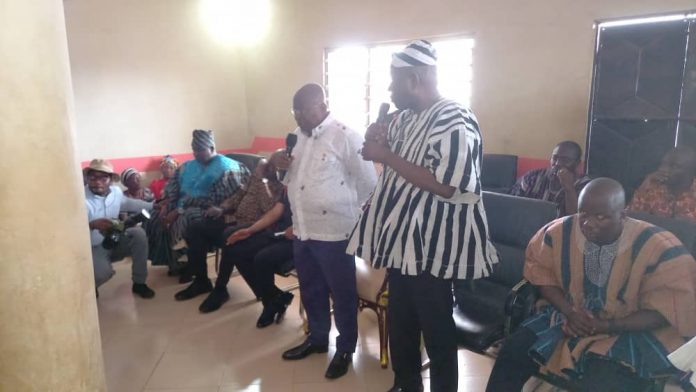 President Nana Addo Danquah has inspected the progress of work on the regional health directorate and the agenda 111 district hospital ongoing at Daboya in the North Gonja district of the Savannah Region.

The 60 bed hospital project which started some 8 months project is expected to serve the people of the area in terms of their health needs.

The Wasipewura also advocated for the Savannah College of Education, a private teacher training college in Daboya to be absorbed by the ministry of education through the help of the President.

The Wasipe Paramont Chief also reminded the President of the construction of the Daboya bridge which the President has for sometime last year awarded to a contractor.

President Nana Addo in his response assured the chiefs and people of the North Gonja district of the Savannah Region that he will do everything in his capacity as the President of Ghana to make sure the concerns raised by the paramount chief are attended to.

He said the 3 seats won in the Savannah Region by the NPP, that is, Damongo, Daboya and Salaga North township roads have been awarded to contractors and would be asphalted soon.

He also assured them that the Daboya bridge would be constructed and he will visit the progress of work of the bridge in his next visit.

He said again that during the Covid-19 pandemic, he realised that more than half of the districts in Ghana including the North Gonja District had no hospitals and that made him to bring one to the people of the district including a regional hospital project for the Savannah Regional capital of Damongo.

He said he is more confident that the projects will be completed, commissioned and handed over to the people before he leaves office in 2025.