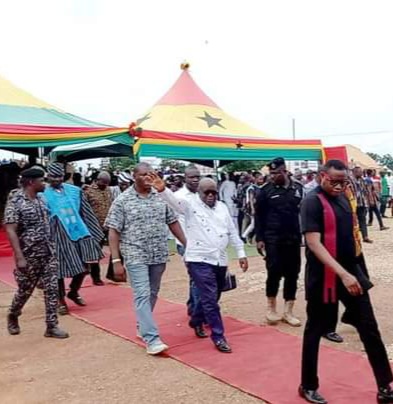 President Nana Akufo Addo has thrown a jab on the MP for the Damongo Yapei-Kusawgu constituency of the Savannah Region and former Deputy Minister of Energy under the John Mahama administration for failing to connect 17 communities in his constituency to the national grid.

Speaking at Yapei in the Central Gonja District of the Savannah region on the day two of his official visit to the Region on 25th August, 2022, President Akufo Addo said in his life time, the Yapei-Kusawgu constituency produced two Members of Parliament (MP’s) in the persons of Alhaji Amadu Seidu, who he described as his former colleague in Parliament and Hon John Jinapor who was the Deputy Minister of Energy.

President Nana Akufo Addo said it is therefore surprising that about 17 communities in the constituency are still not connected to the national grid.

One of the things that surprises me is that Yapei-Kusawgu since 1992 I’ve known two people..the first one was my very hood friend Amadu Seidu. We Mt in Parliament and we bacame friends and that friendship has lasted till today. When he left the Elder brother of the excellent young man who is a Minister for Lands and Natural Resources and also a member of Parliament for Damongo Abu Jinapor’s, brother then took over as Member of Parliament for Yapei-Kusawgu”.

President Akufo-Addo added; “What this tells me is that the 8 elections we have held in Ghana since 1992 have always gone to the National Democratic Congress and yet when I come here, I hear of all these demands…the young man who for a long time was Deputy Minister of Power, 17 communities in his district struct still not being connected to the electricity grid”.

The President futher said said; “but Yapeiwura you are lucky, you have me as the President of Ghana..I’m going to do it for you”.

He said; “In the same way no Senior High School, no Senior Technical High school in the whole of the Kusawgu area, ahh..eeiiii. Yapeiwura I’m not here on a campaign but I think that I’ve said enough for you and the people of Kusawgu to think about your votes in 2024”.

The President was responding to an appeal made by the Chief of Yapei, Yapeiwura A.B.T Zakaria to the president for the extension of electricity to some 17 communities in the Kusawgu area.

Yapeiwura also advocated for the splitting of the Yapei-Kusawgu constituency into two to enhance development in the area since the size of the Constituency is affecting the development of the area.

Yapeiwura who spoke on behalf of the Paramount Chief of the Kusawgu Traditional Area said; “It would be recalled that my predecessor the late Jirah Kusawguwura Ewuntomah Kunkarga of blessed memory on 27th July, 20220 appealed to you Excellency when you called on him to create a new District from the present Central Gonja district…they empathize that this will bring development to the Kusawgu and Tuluwe Traditional areas”.

He commended the President for the planting for food initiative and the Green Ghana project that is leading to the planting of trees in the country.

On the issue of health, the Yapeiwura advocated for the establishment of more health facilities in the area which made the MP for the Daboya- Mankarigu Constituency and d
deputy health Minister Alhaji Asei Mahama to respond by assuring the people of Yapei that apart from the establishment of the agenda 111 Hospitals in the region including a regional hospital in Damongo by the government, all CHPS compounds would be upgraded to polyclinics in the coming years.

The President whilst in the constituency inspected the progress of work on the 71Km Yapei-Fufulso-Bunjai road.