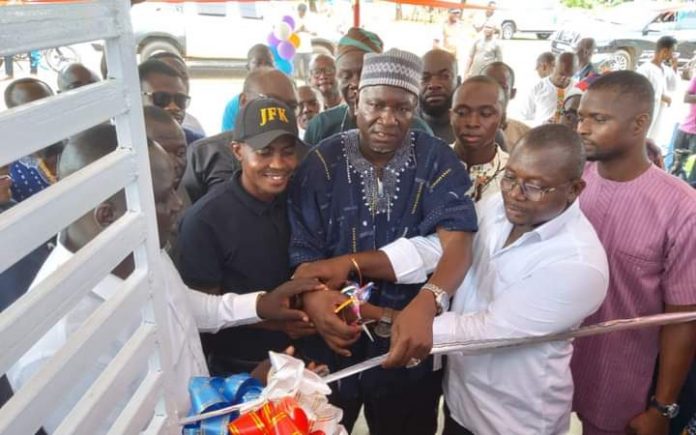 The Savannah Regional Chairman of the New Patriotic Party Alhaji Sulemana Iddrisu a.k.a Proff Kalamonia has served a warning to the National Democratic Congress (NDC) that, his Party (NPP) is ready to wrestle majority votes in the Presidential elections in 2024 in the Region even though the likely NDC candidate former President John Dramani Mahama is from the Region.

He said the NPP in the last election (2020) made a great impact by winning three seats in the region, but the votes of the presidential was a problem for the party. He said he is very optimistic of the NPP not just winning in 2024 but increasing their votes with a huge margin in order to break the 8.

Proff Kalamonia made these comment when he led the Regional executives of the NPP to commission a newly built Secretariat for the party at Damongo on Saturday 13th August 2022.

The Commissioning of the office saw the assembly of Party executives in the region and constituencies as well as some elders of the party in the region. Many sympathisers of the NPP also thronged the location to support in the commissioning.

The Savannah Regional Chairman of NPP described the new party Secretariat as a temporal structure which the party will operate from in the meantime with the intention of building a permanent one later.

Proff Kalamonia said the NPP Regional office was built near the Savannah Regional Police command because they are peace living and abhor violence.

He described the NPP as a peace loving party with lots of good prospects and intentions for the Savannah Region.

The Savannah Regional Secretary of the NPP Mr Mohammed Issah in a speech thanked the Member of Parliament (MP) for the Damongo Constituency Hon Samuel Abu Jinapor and the Chief Executive Officer (CEO) of the Ghana Water Company Dr Clifford Braimah for supporting them financially in making sure the party gets the structure.

He said prior to the NPP regional election, he made a promise to establish a party Secretariat that will operate day and night and after winning as the secretary, he started the process which was fully supported by the leadership of the party.

The new Secretariat has a fully furnished office with computers and a mini conference room that can accommodate close to 100 people, also fully furnished with a big plasma TV fixed inside it.

Meanwhile, President Nana Addo Danquah Akufo Addo is expected in the Savannah Region on the 24th August 2022 on a working visit to the region where he is expected to commission the newly built Savannah Regional Coordinating Council which has over 100 offices among other projects that has been completed in the region.