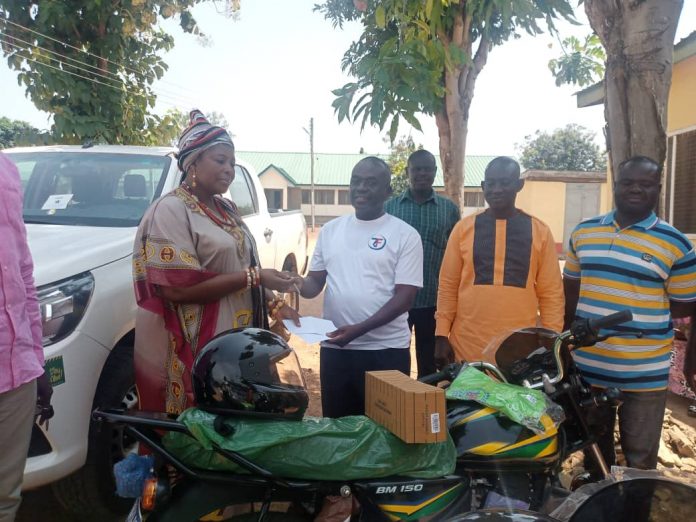 The Zakat Foundation of America, a non governmental organization that operates in the Bole District of the Savannah Region has on Sunday 7th August, 2022 donated to the Bole District Health Directorate and the Ghana Education Service two Boxer motorcycles for each of the two institutions upon request from these institutions to aid them carry out their duties successfully.

The Bole District health director Ndapewurche Hajia Fusehina Sulemana and the Bole district Coordinator and the head of supervision of the Ghana Education Service Mr Jamani Bakari received the motorbikes on behalf their various offices.

The Bole District health director thanked the Zakat Foundation for its support to the health institution and noted that the foundation had earlier donated to them boleholes, motorking ambulance and now the motorcycles.

In an interview with Nkilgi Fm Ndapewurche Hajia Fusheina said her office wrote a letter to the Zakat Foundation to request for motorcycles to be able to go to some communities where they have mental health workers to see their progress of work since those places are far away from them.

She added that they do not classify people who have mental challenges as mad because they see them as people going through some form of sickness.

Ndapewurche said there are those with such sicknesses that are chained in some homes which is not the best and therefore having the motorcycle will help the workers visit the sick and give them proper care.

The Head of supervision of the Ghana Education Service Mr. Jamani Bakari, also thanked the Zakat Foundation for the donation and said that this has not been the first time the foundation came to their support, indicating some of the things they have done for them in the past.

Speaking to Nkilgi Fm, Mr. Bakari said they had a call from the Zakat Foundation of America that they will be donating a motorcycle to the Ghana Education Service to be given to the School Health Education Program, (SHEP) coodinator.

He said the reason for the donation to the coodinator is because they run various educational programs on health in the schools which the coodinator has to go round to check on them and getting him the motorcycle will help him carry out his work deligently.

The Head of the US Zakat Foundation in Ghana, Alhaj Salia Hassan said the donation is to the health directorate mental health division and the health coordinator of the Ghana Education Service is for them to be able to visit school children to educate them on mental issues.

Meanwhile the foundation has under taken so many projects in the Bole Traditional Area which includes Mosques, 39 mechanised boreholes, gari processing machine at Korupe, dug wells for some communities and Mosques, and also donated 5 tricycle ambulance to 5 health centers.

The foundation also connected the Bale and Teselima Community-Based Health Planning and Services (CHPS) compound to the national grid, undertook the connection of water from Jugboi to Bamboi poly clinic, built a multipurpose ultra-modern community center at Bamboi, 3 classroom block at Chibrinyoa and some other communities.

Currently the Zakat Foundation have dug a borehole which is yet to be mechanised for the Bole central Mosque and A Mosque at Sawla Senior High School, and also promised to build a Mosque for the Bole Hospital due to start in October, 2022.

The Zakat Foundation operates not only in Ghana but also in Ivory Coast, Togo, Benin and Burkina Faso.