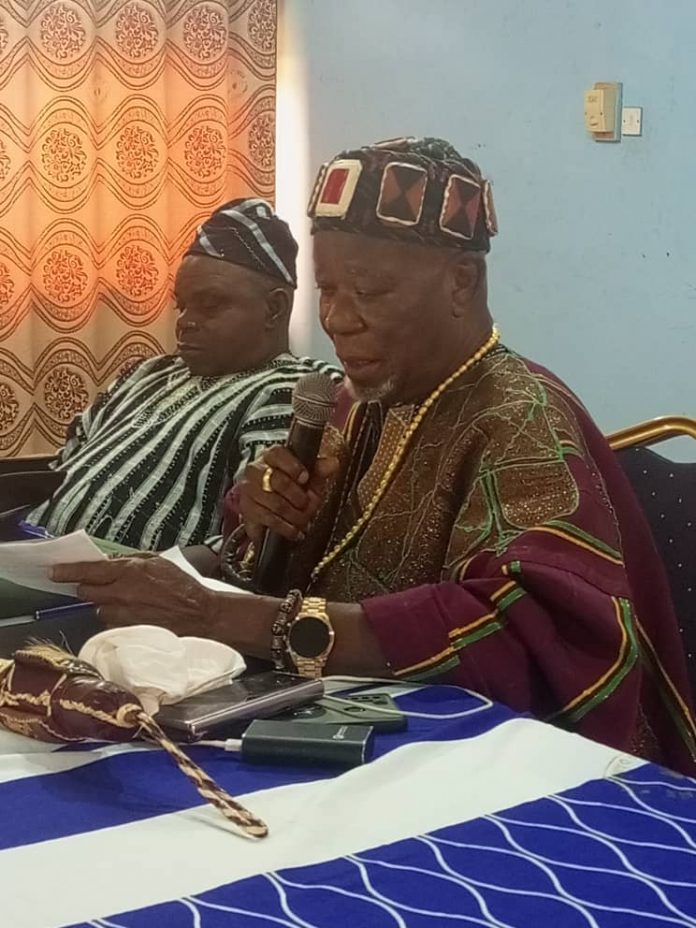 Addressing the Savannah Regional House of Chiefs on behalf of the Yagbonwura during a training workshop on Covid-19 and peace building on 2nd August, 2022, the Registrar of the Savannah Regional House of Chiefs Mr Abutu Kapori said peace is the only tool that can develop the region and urged every body to embrace it since we are one people in the region.

“Without peace, nothing moves on” the Yagbonwura said and urged the participants to keenly concentrate on the various presentations by the experts to inure to the overall benefit of the Savannah Region.

The Overlord of Gonja commended the organizers of the workshop. He said; “The Traditional authority of the Region wish to commend the implementing agencies for this august activity in the Savannah Region. Our relationship with you will continue to impact development in the Region”.

he meeting was Chaired by the Vice-President of the Savannah Regional House of Chiefs Buipewura Abdulai Jinapor (II).

She indicated that 7 death cases out of the 338 confirmed cases were recorded and urged every body to vaccinate against the disease.

She commended the Bole district for recording higher number of people in the region who vaccinated against the disease and urged the people of the East Gonja district to step up in the vaccination exercise since numeber there are not encouraging.

Mrs Kulah Janet also appealed to the entire region to adhere to the safety protocols to avoid the contraction and spread of the disease in the region.

She spoke about the emergence monkey pox and the malburg virus which was recorded in the Sawla-Tuna-Kalba district and cautioned everyone to be extra vigilant by taking the safety precautions serious.