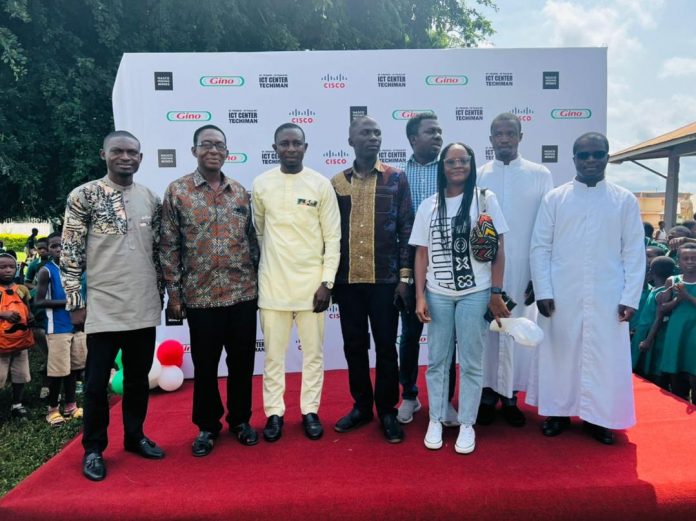 Present at the launch of the ICT lab centers were the Municipal Chief Executive (MCE) for Techiman Mr Benjamin Yaw Gyarko, the Municipal Director of Education among other high profile dignitaries from Gino Ghana Limited.

The beneficiaries of the ICT centers are Fiaso M/A cluster of Schools in Fiaso and Francis and St. Paul’s Roman Catholic Schools in Techiman.

Mr Banasco Seidu Nuhu in his keynote address to the gathering expressed his heartfelt gratitude to the distinguishd invited guest, School authorities, Students and the general public for honouring the invitations.

The Executive Director of Nasco Feeding Minds recounted his childhood days in Fiaso as his hometown and root because he was born and raised up in there.

Mr Banasco Seidu Nuhu said; “Growing up, I have always had the zeal of giving back to others in any way big or small and the NGO Nasco Feeding Minds was birth from that zeal alongside my brother Osman with the mandate to curb the youth from embarking on illegal migration
through unapproved ways”

He said to curb this canker, Nasco Feeding Minds has sphere headed timely social projects with initiatives such as Bee
keeping, Tree planting among other essential projects and establishment of many ICT labs in various deprived community schools through notable partnerships in the Sawla District and the diaspora.

Mr Banasco indicated that the vision of Nasco Feeding Minds is to spread it’s wings across Ghana and it is now the due turn of Techiman and Fiaso.

He expressed his profound gratitude to Platinum sponsors such as GB Foods, Cisco, Stakeholders and volunteers for the great amount of support in making it possible to launch the thirteenth (13) and fourteenth (14) ICT labs in Techiman and Fiaso.

He said; “the initiative is to encourage and enable our children, the future leaders of tomorrow’s world to be equipped with competitive advantage on technology and to have access to skills in the ICT processes because the world is evolving at a fast rate with digital evolution at its
forefront”.

Mr Banasco Seidu Nuhu concluded his address by stating; “as we do our part by launching and handing over to the community, I would reiterate, to be diligent custodians, promote continuity and champion
sustainability”.