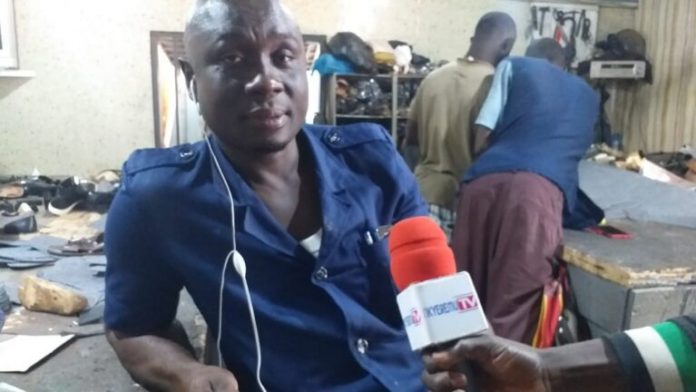 Mr Asumah Ibrahim, from Daboya who started his trade as a Shoe Shine Boy in Techiman in the Bono East Region has made great strides in his leather works business as his shop hosted eighteen (18) sponsored European Union (EU) apprentices for a workshop in his training center located in Techiman.

The one-month sponsored European Union apprenticeship workshop on leather works and shoe making was successfully held in Techiman of the Bono East region on 23rd June, 2022.

The Eighteen apprentices were taking through comprehensive methods of leather shoe making to gain the prerequisite skills and experience of making standard international shoes with leather.

The workshop at the end seek to instill entrepreneurship skills to the apprentices to make them self-sufficient and train more people into the trade.

In an exclusive interview with Bole based Nkilgi Fm, Mr. Asumah Ibrahim, a facilitator and trainer of the EU sponsored workshop narrated how the European Union considered several factors in the selection of the center for the training.

He said, the criteria involved several factors of workmanship and dedication to the craft and his exceptional experience with how he started as a shoe shine boy played a major role in his center being selected to train others.

Recounting his journey in the leather work business, Mr Asumah Ibrahim said he started his trade as a shoe shine boy in 1993 when he was in basic school and practice his trade on a table top as his shop in his Junior High School years.

He said conditions were not favourable to him so he travelled to Kumasi in the Ashanti region to become an apprentice, learning shoe making whiles sleeping in a broken abandoned kiosk.

After passing out of his apprenticeship he relocated to Techiman to start his own center now turned to a recognize European Union training center.

In his estimate, he has trained and mentored many apprentices who have moved on to become successful Shoe makers setting up their own business across Ghana.

In appreciation, Mr. Asumah Ibrahim thanked everyone who made it possible for him and his training center to be recognised and adviced the youth to learn a trade to aquire skills with their hands for a better future being their own masters and stop seeking for none available white colour jobs.

Other regions in Ghana that had the opportunity for the European Union sponsored apprenticeship program are the Ashanti, Western and Volta regions.