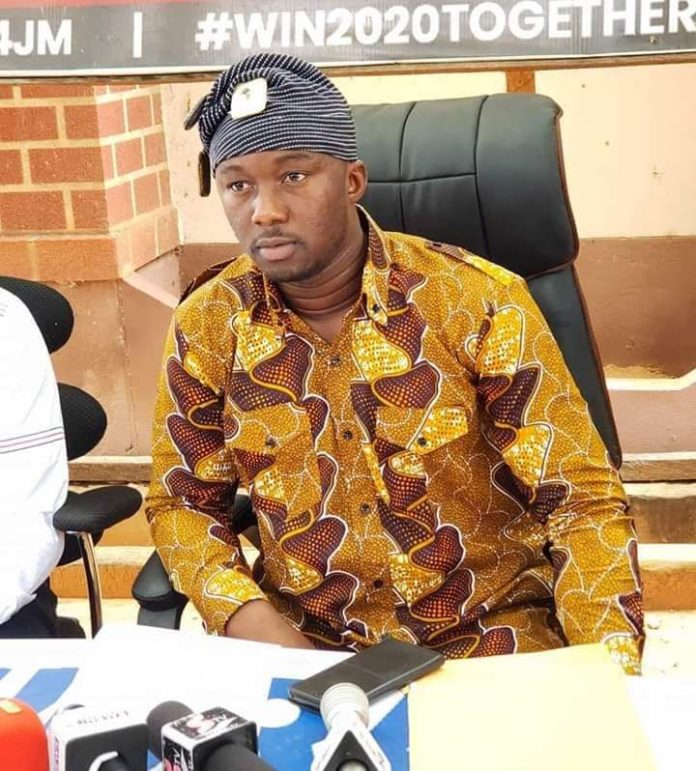 The National Democratic Congress (NDC) in Savannah Region has dared the Vice President of Ghana Alhaji Dr Mahamudu Bawumia to state just 10 of his sweet old promises to the Savannah region.

The Communication Officer of the NDC for the Savannah Region Mr Malik Basintale in a press release dated 16th February, 2022 and copied to Bole base Nkilgi FM said the NDC in the Savannah region is once again in a state of shock and melancholy following the visit of the Vice President, Bawumia into the Savannah Region on the 14th of February, a day set aside to mark the exhibition of genuine love but not deceptions and propaganda.

Malik Basintale
sais, one would have thought the Vice-President would, for the first time, be charitable enough to recognise the essence of that day, but instead, he settled for his usual promises.

Mr Basintale indicated that the people of Savannah Region are tired of the lies and sugar-coated talks with no action of which the vice president Bawumia is well known for.

He said, the people of Savannah Region are disappointed in yet again another empty visit of the vice president.

“We appear vindicated in our long standing position that the Akufo-Addo, Bawumia led government has nothing but lies and hollow rhetorics to offer the indigenes of the Savannah region and constantly renews that mandate anytime they visit on a political tour. It appears President Akufo-Addo feels delighted and fulfilled anytime they succeed in throwing dust into the eyes of our elders”; he added.

Mr Malik Basintale listed what he issues is a number of uncoordinated lies and usual rhetorics from the NPP usually channelled through the Vice- President Dr. Bawumia.

“Firstly, at the 45th Gonjaland Youth Association Congress in Bole, on the 3rd of April, 2021, Bawumia said the Damongo water project is ongoing and will soon be ready for commissioning.”

“On the 14th of February 2022, nearly 1 year after, the same Bawumia at the Yagbonwura’s palace has now stated that mobilisation has just been secured for the Damongo water project and the contractor is going to come and start work”.

Mr Basintale said, all these rhetorics come at the back of the President himself, claiming to cut sod for the Damongo water project on the 29th July 2020 and assuring the people of Damongo that funding had been secured and works were to commence before the 2020 elections and completed in 18months and as such needed their votes to ensure his victory.

He said the same Akufo-Addo returned in July 2021 to tell the Yagbonwura and the people of the Savannah region that funds had been secured already, but due to the corona virus, the project was delayed and was to commence in August 2021.

“Who then do we believe?;” the Savannah Regional NDC Communication Officer asked adding “the many-mouthed” vice president Bawumia or the consistently misled president Akufo-Addo as the Damongo water project till date is still in a limbo?”

Mr. Basintale said, the duplicitous Vice-President Bawumia again made assertions to the fact that the Debre inland port was soon to be completed as one of the government’s projects. This is clearly false as the project is a private project fully funded by a private investor and has no business with the NPP government.

Mr Basintale therefore requested that the Vice-President stay away from touting this as their achievement so as not to discourage the investor from continuing works on that project.

According Malik Basintale the claim by the Vice-President that the government has provided enough boreholes for the Savannah region is again false as the sanitation and water resources minister in December 2021 confirmed through a parliamentary document that no borehole nor small town water system had been provided for the Savannah region.

He asked; “Where then did Jocular Bawumia get his different set of facts from?”

Malik Basintale said amidst all these lies and falsehoods, the double-dealing Vice-President Bawumia went further to as usual make his humongous but empty promises, among which was the setting up of a module school of international standards at Busunu in the WestGonjaMunicipality.

He indicated that, as long as the NPP, Akufo-Addo, or Bawumia stay in power, the people of the Savannah region remain hopeless of development.

He said the people of Savannah Region are used to the five years of sweet sugar-coated talks with no action and will no longer be deceived by election seeking masquerades.