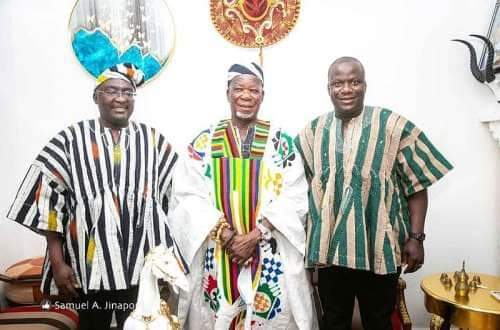 Buipewura Jinapor made the comment on 14th February, 2022 at the Jinapor Palace in Buipe when the Vice -President Bawumia paid a courtesy call on him to thank him for leading a delegation of Chiefs to Walewale during the funeral rites of his mother Hajia Mariama who died last December.

Buipewura Jinapor described Dr Mahamud Bawumia as his son just as the Damongo Constituency Member of Parliament (MP) Hon Jinapor is his son.

He said Dr Bawumia’s father was a friend to he Buipewura Jinapor’s father as late as 1960 and he also later became close to the Vice-Presidents father in 1970 when he was a Police constable at Tamale.

He added that anytime Dr Bawumia visits his Palace, he sees him more of his son than a Vice-President.

Buipewura Jinapor therefore assured him of his full support in all his endeavors with the backing of Gonja kingdom.

Dr Bawumia in an address thanked the Buipewura for leading a delegation of chiefs to Walewale on behalf of the Yagbonwura during his late mother’s funeral.

On development, Vice- President Bawumia hinted of coming back to the Debre traditional area of the Central Gonja district of the Savannah region to cut the sod for the construction of an Inland port that will open up the area to lots of investors and also develop the area since cargo for the northern sector and other neighbouring countries will no longer be stationed in Tema but would be cut straight from the Debre Port.

On the issue of Damongo water project, the Vice-President said, although a lot has been done for the Gonja Kingdom, the government knows water is the major challenge affecting the people of the regional capital and its environs.

The Vice-President added;
“The President has been very clear and that is why I am happy to say the Damongo water project that we have initiated, which we have seen a lot of work done by the MP for Damongo, we have got the mobilization for the project, and we have given it to the contractor for him to come and start the work. It is a project we are going to look at carefully to ensure that it is completed on time for residents to enjoy water”.

He also hinted of a modern model school that will be constructed by the NPP government at Busunu in the West Gonja Municipality of of the Savannah region.

The Vice-President explained that a Science, Technology, Engineering, and Mathematics (STEM) ultra modern school will also be built at Busunu to uplift education and skills development in the area. STEM-based education teaches children more than science and mathematics concepts.

Meanwhile, the MP for the Damongo Constituency Samuel Abu Jinapor has also assured the people of the Buipe traditional area that the Buipe- Kotito-Damongo road would be awarded to a contractor for work to commence on it.

He said the Buipe township roads are also not left out as work will soon commence on the project as well adding that Dr Bawumia has served and surely shall he also be served.