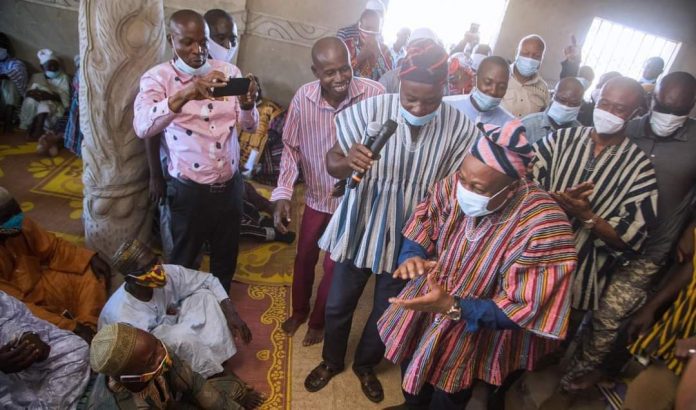 The Bolewura said; “should you decide to contest as President, the campaign is not yours but for we the Chiefs of the Bole Traditional Area”.

The Bolewura laced his statement with a proverb that, “If a vulture in town takes someones meat, it will eat it and leave some in the town but if a vulture from far away takes such meat, it carries it away”.

He further said, “John Dramani is a son of Bole; he is our brother and Uncle and our hope and so we will not sacrifice him for anything”.

The Paramount Chief of the Bole Traditional Area made these comments on 31st January, 2022 when former President Mahama visited the Bolewura’s Palace to to thank him for his role in ensuring that the final funeral of his late brother Mr Emmanuel Adam Mahama which took place on 30th January, 2022 was successful.

Bolewura Kutuge Feso (I) asked the Bole Imam and the entire community to pray for John Dramani Mahama and also support him to become the next president of the republic of Ghana.

He also urged the youth to support John Dramani Mahama and the National Democratic Congress (NDC) party to win more seats in parliament to make his job easier for him.