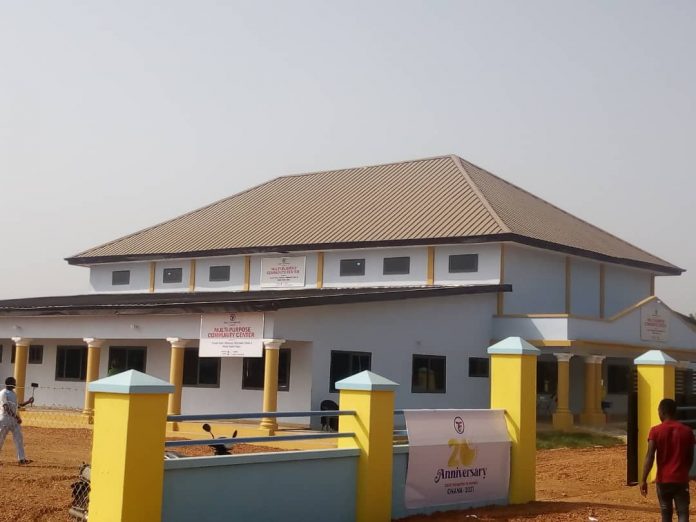 An international Charitable organidation (NGO) founded in Chicago-USA in 2001 and stretching its wing to Ghana in 2002 has unveiled a new multipurpose community center in the Bamboi community in the Bole District of the Savannah Region on 22nd January 2022.

Speaking at the unveiling ceremony covered by to Bole based Nkilgi FM, the Zakat Foundation representative in Ghana Alhaji Salia Hassan said from a very humble beginning in Ghana the Zakat foundation has intensified and extended its charitable activities to the neighbouring Ivory Coast, Burkina Faso, and Togo as well.

According to Alhaji Salia, the new multipurpose community center auditorium has a 300 seater capacity splitting the conference center with 50 seaters, a library with 40 seats for the community and students use, a gym center, and a mini-clinic for patrons.

He added that the community center is worth the expense of GHc1.3m and is also connected with a mechanised borehole.

Alhaji Salia disclosed that the Zakat foundation is 20 years old in Ghana on 22nd January, 2022 and as part of its 20th-anniversary celebration under the theme; “celebrating 20 years of changing lives” they put up the edifice in Bamboi.

Speaking on the impact of Zakat Foundation in Ghana, Alhaji Salia mentioned 23 projects the foundation initiated including support for over 200 orphans, building 15 mosques and the renovation of Church building in Teselima in the Bole District and providing 6 tricycle emergency ambulances to 6 CHPS compounds.

He said the foundation also donated computers to some selected schools and the Police service at Bole and Bamboi in 2009, connected Teselima and Bale to the National Grid, connected 5 mechanised Boreholes some selected communities including the Bamboi Poly Clinic and other projects.

The Zakak Foundation Ghana representative concluded by mentioning the positive changes they brought in Ghana including the unveiling of the Bamboi new community center on their 20th anniversary celebration.

A sub Chief of Bamboi Nana Kwaku Dapaah ll, C.K Chirankwa in behalf of the Omanhene of Bamboi and President of the North Mo Traditional Council (NMTC), said the first community centre for Bamboi was built during the 1st republic over 40yrs and unfortunately, during the construction of the second road in Bamboi township, it affected part of the building which was demolished.

Nana Kwaku Dapaah added that all efforts by the Chiefs, opinion leaders and the youth to get a new facility failed and so the intervention of Alhaji Salia and the Zakat foundation towards human and infrastructural needs of the North Mo Traditional Council and beyond cannot be measured mentioning the interventions of the foundation in the areas pf Health, Education, Water and Sanitation, Ambulance services, Widows and ophanage homes, Mosques and other fields.

“In view of the achievements, the Paramount Chief Nana Kwaku Dapaah II in consultation with his council of elders saw the need and have awarded Alhaji Salia Hassan at a colourful ceremony hence he was crown the development Chief of Bamboi”; the Bamboi sub- Chief said.

He assured the Zakat foundation that the Chiefs and people of Bamboi would put the Community centre into good use and consider a maintenance policy to sustain the life span and as well adopt innovative strategies to market the facility.