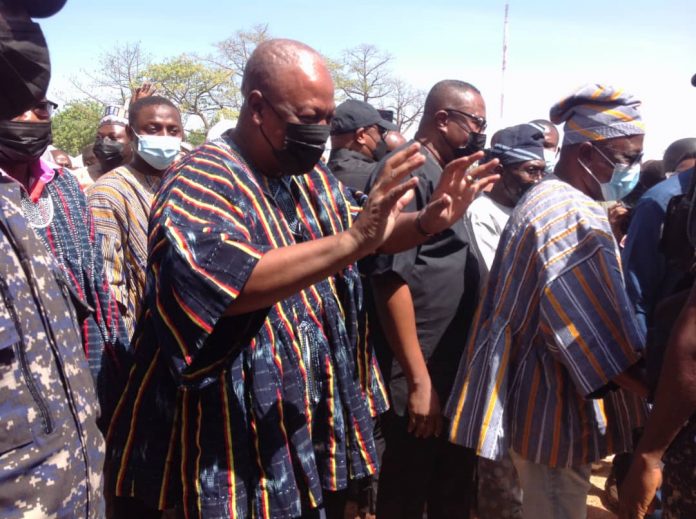 Former President John Dramani Mahama has thanked the people of the Gambaga- Nalerigu constituency of the North East region for electing Alhaji Baba Issifu as the Member of Parliament (MP) for the area and giving him and his National Democratic Congress (NDC) majority votes in the 2020 elections.

“Indeed you are one of the constituencies that has helped NDC to hold its hold in Parliament.. if you would remember in the last Parliament it was 169 for NPP and 106 for NDC but now it is 137 for NPP and 137 for NDC and I know that you will support us again so that in 2024 election so it would be 165 seats for NDC and they (NPP) will go down to 110 seats”.

Former President John Dramani Mahama made these comments when he visited Gambaga on 17th January, 2022 for the funeral of a prominent Gambaga man, Alhaji Ligbi Adam Midjida.

Speaking at the funeral Mr Mahama who was given a rousing welcome to the funeral grounds said he was in Gambaga for three reasons; firstly he is as an in law of the late Alhaji Midjida because former Minister of Agriculture Alhaji Mohammed Muniru, who John Mahama said is his brother from Busunu in the Central Gonja Municipality is a father in law of the late Alhaji Ligbi.

The second reason for the visit according to former President was because of Hassan Midjida who is his friend and whose father was the late Alhaji Midjida and lastly to thank the people for voting for his party NDC.

The former President made a glowing tribute to the late Alhaji Adam Ligbi Midjida who he said was selfless and was blessed with long life to help not only the people of Gambaga but Mamprugu and Northern Ghana.

Earlier former President John Dramani Mahama was at the Palace of the Overlord of Mamprugu (Nayiiri) Naa Bohagu Mahami Abdulai Sheriga nearby Nalerigu to pay courtesies.