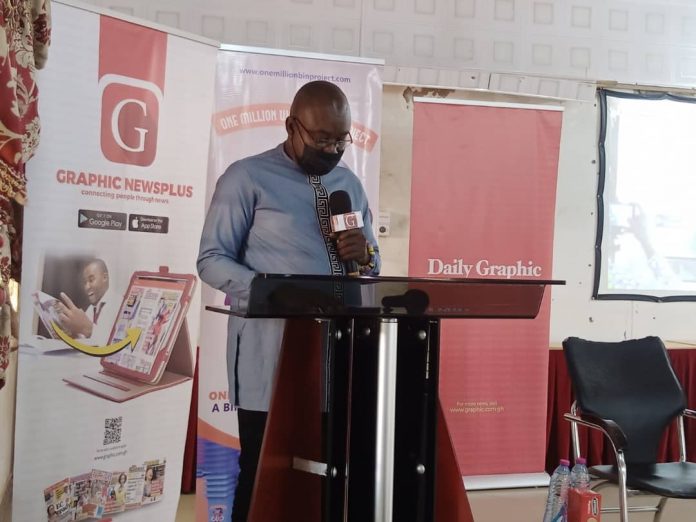 Graphic Communication group and a Waste management company ZoomLion Ghana, have organised a stakeholders forum on sanitation in the Savannah Regional capital of Damongo with the theme ”Keep Ghana Clean” to sensitize the people about the dangers involved in living with filth.

The one day workshop on 10th November, 2021saw in attendance representatives from the various government sectors as well as religious bodies and traditional authorities.

Speaking exclusively to Bole based Nkilgi FM Mr Adams Mahama who represented ZoomLion Ghana said over the years attitudinal change has been a problem which every stakeholder must know his or her role to be able to fix that with ZoomLion focusing on the role played by each stake holder knowing their responsibility and abiding by them,the wouldn’t be a major challenge in sanitation issues. He said stakeholders have been categorized into 3 umbrellas including the government which is in charge of the provision of infrustucture and policy to ensure waste management such as plants provision also enact policies to manage waste with partner number 2 being private waste management companies such as ZoomLion which is mandated to give their clients receptacles and also augment government efforts in ensuring good infrastructure like ZoomLion has done over the years.

Mr Adam added that it is the responsibility of every individual to look into sanitation issues to ensure a healthy living in the company.

He further hinted of an award scheme that will soon be advertised in the Graphic for the best and cleanest region which every region must work hard to win.

The Savannah Regional Minister Mr Saeed Jibril Muhazu whose speech was read on his behalf said negative behaviours foster the practice of open defecation, throwing waste in the environment with the attendant complex outcome of diseases and other looming public and environmental health threats.

He said the Savannah Region Coordinating Council is leaving no stone unturned in order to building strong partnership to harness resources to improve the sanitation situations in the region and currently, the coordinating council is working with UNICEF, World Vision International among others to tackle sanitation issues in the region.

He added that plans are underway to institute a Regional Sanitation Campaign which is expected to be launched by the end of the year with all 7 Municipal and District Assemblies by extension continuously organising monthly cleanup exercises that will enhance environmental safety.

He further recommended that the stakeholders dialogue should be an annual event where reviews can be made on what is working and what is not working and design interventions for remedy.

He again requested for ZoomLion to consider developing waste water treatment plants in all the 7 districts in the region and also support the MDAs to strengthen the Environmental Health and Sanitation Department.

Nkilgi fm spoke a sub-chief of Gonja Mpotonsowura Yakubu Siibu after the programme and he said most sicknesses are as a result of not adhering to proper sanitation.

He thanked Graphic and ZoomLion for the programme and called on everyone to take sanitation issues serious.

The Daily Graphic an Zoomlion Sanitation Dialogue series is being held in all 16 regional capitals in the country to whip the citizenry up to adhere to good sanitation practices, including changing their attitude towards environmental cleanliness.
Initiated by media giants, the Graphic Communications Group Limited (GCGL), the campaign is sponsored by Zoomlion Ghana Limited, with support from the Environmental Services Providers Association (ESPA) and McVities.