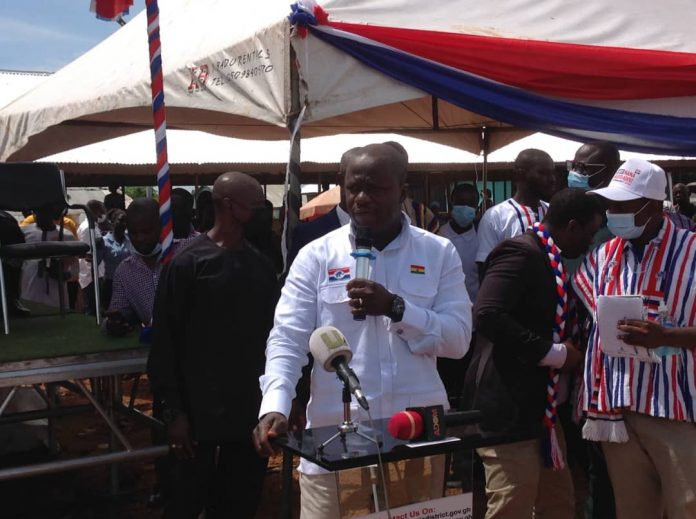 The Member of Parliament (MP) for the Damongo Constituency and Minister for Lands and Natural Resources Hon Samuel Abu Jinapor has charged members of the New Patriotic Party (NPP) in the Savannah region
to remain united for another victory come 2024.

Speaking at Daboya in the North Gonja District of the Savannah Region during the NPP first delegates conference in the region on 1st Octobe, 2021, Mr Jinapor said the NPP in the Savannah region is poised to win the entire seven constituency seats come 2024 general elections and poised also to break the 8 years political cycle in Ghana.

He said; “The Savannah region is going to contribute its quota to the forward match of the NPP , God willing 2024 the NPP in the Savannah region will fight for every vote and we will battle for every political space in all the seven constituencies because we have to break the eight with unity”.

He added that the region is more represented in the President Akufo-Addo’s government than any other government including the then John Dramani Mahama’s government which clearly shows the love of the NPP for the people of the region.

The National Secretary of the New Patriotic Party (NPP), John Boadu in an address during the Congress also urged the people of the region to vote massively from the 80,000 voter margin to over 10,000 for the NPP come 2024 since the Nana Addo led administration has done enough by creating the Savannah Region hence “to whom much is given much is expected so we are hoping that in 2024 we will increase our votes from 80,000 to 100,000 in the Savannah region”.

Mr John Boadu in response to the NDC Regional Deputy communication officer RA Jalil’s solidarity message during the conference that the NPP has abandoned road projects in the Savannah region, accused former President John Dramani Mahama of awarding some of the road contracts to his brother in the Savannah region who has refused to complete them.

John Boadu said; “Former president John Dramani Mahama awarded a contract to his brother and he has been paid but he decided not to continue with the contract and you have the audacity to come and stand here at our conference to rather accuse us of not completing a project that he former president have to his brother.”

He further indicated that the NPP government has implemented policies that has transformed lives in the country including the creation of the Savannah region and urged the people of Gonjaland to have full confidence of the party.

The Savannah Regional minister Saeed Jibril Muhazu on behalf of the President thanked everyone for making it to Daboya and assured the people of the region that there is more in the pipeline for the infant region.

He also responded to the NDC Deputy Communication Officer that the Bole Teacher Training College which the NDC is accusing the NPP of neglect has no documents that proves its source of funding and that it was a 419 project from the the then NDC government that was used for votes.

He indicated further that the Daboya road project has been neglected by the contractor who happens to be a younger brother to former President Mahama after he was duely paid and will soon be see the contract being taken away from him to a different contractor if he fails to move to site.

Meanwhile, Savannah regional Chairman for the NPP, Alhaji Iddrisu Sulemana aka Professor Kalamonia in an address said the Savannah region
was targeted below the current status at the national level but the party worked against all odds to achieve it’s target and that there was no region in the country that was able to increase its parliamentary seats by 2 constituencies in the 2020 general elections accept the Savannah region.

He further indicated that the huge support from the national level gave our grassroots the power and strength to match the NDC boot for boot which gave out the party’s massive performance.

He called on the party supporters to stay united and appealed to the national level to resource the Savvanah region ahead of 2024.