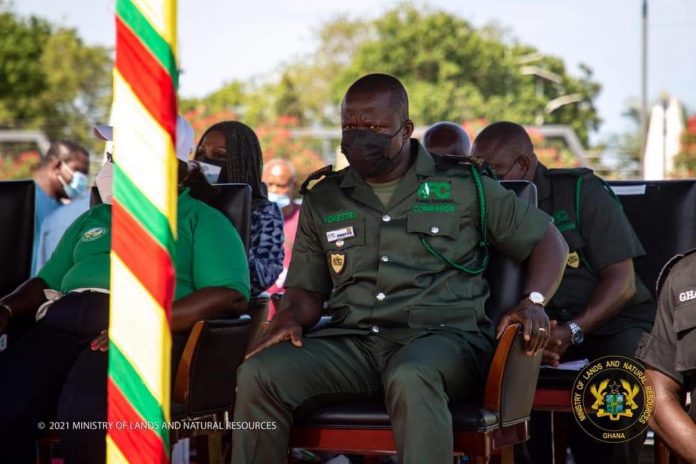 The Member of Parliament (MP) for the Damongo Constituency of the Savannah Region Hon Samuel Abu Jinapor has extended support to about one hundred and fifty subsistence farmers from five communities which fringe the Mole National Park who were affected by elephant crop raiding activities on 19th July, 2021. The five communities are Kabampe, Kananto, Larabanga, Murugu and Mognori.

The purpose of the support engineered by the Park Manager of Mole National Park Mr Ali Mahama is to help the farmers to obtain inputs for the new planting season and this is part of several hundreds of farmers the MP is going to support.

Speaking to Bole based Nkilgi FM, the Manager of the Mole National Park Mr Ali Mahama saidnthe major highlight of this intervention by the MP was that the farmers were also trained by officials of the Mole National Park on efficient methods to help mitigate elephant crop raiding in their farms using canister blasters as well as pepper-grease line fences as the phenomenon of crop raiding appears to be on the increase which if left unchecked, is the loss of rural household incomes and also the threat to food security in the area. Mr Mahama said the park officials appreciate the intervention of the MP and further disclosed that this is the first of its kind that farmers whose crops have been destroyed by elephants have been supported to procure farm inputs.

The beneficiary farmers were very elated by this gesture from the MP and pledged their support towards issues of wildlife conservation, especially the protection of the Mole National Park and its very important elephant population.

The Mole National Park is Ghana’s premier wildlife protected area (PA) and covers a land area of approximately 4,577 km square . It is managed by the Wildlife Division of the Forestry Commission and is located in the Guinea Savannah ecological zone of northern Ghana.

Mole is considered globally as an important biodiversity hotspot and holds the largest and most viable population of savannah elephants in the country. Aside being home to the largest mammal on land, the elephant, other species found in the Park include the Leopard, Hyena, Roan antelope, Hartebeest, Bushbuck, Kob, Baboon and the Green Monkey. The Park is bordered by over 33 communities, with a total estimated population of approximately 50,000.

Many of these communities are mostly agrarian with farming, rural agro-based industries, petty trading and to a lesser extent ecotourism identified as the major socio-economic activities that they engage in.