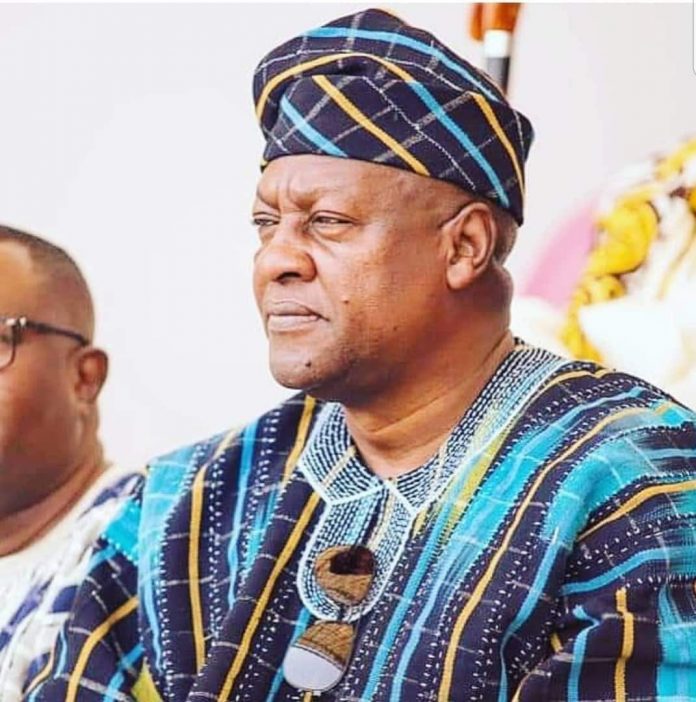 Former President John Dramani Mahama in his 2021 Eid-ul-Adha message said there is the need for Ghanaians to be reminded of the value of obedience and sacrifice as Muslims celebrate Eid-ul-Adha across the world.

Mr Mahama in his Eid-ul-Adha message on 20th July, 2021, said Ghanaians should use Eid-ul-Adha to inspire people to give back to humanity something that is bigger.

The former President also sent a specific message to Muslims in the Bole-Bamboi constituency of the Savannah stating that he has always cherished their support over the years and that they should continue to pray for him in all his endeavours.

The Bole MP said; “former President John Dramani Mahama who is from Bole here has asked me to tell the good people of Bole-Bamboi Constituency that he has not forgotten of the good things they have done for him over the years and that Inshah Allah (God willing) he is likely to come back to contest elections in his party and so they should use this special Eid-ul-Adha day to thank God and to ask for good health, success and victory for him”.

Hon Sulemana added that Prophet Ibrahim was commanded by God to sacrifice his only son Ismael to God and that Ibrahim made an attempt; which is the highest form of obedience to God and so former President Mahama entreats his Bole-Bamboi constituents to continue to be obedient to their creator, their parents, elders and also respect and love each other.

Former President John Dramani Mahama is extremely popular and always receiving massive votes in his home constituency of Bole-Bamboi where he effectively served as the MP for 12 years (1997 – 2009) before rising to become a Vice-President and President of the Republic of Ghana.

In the 2020 Presidential elections John Dramani Mahama polled 30,443 out of 38,392 valid votes representing almost 80% of the votes of the Bole-Bamboi constituency.

This is in contrast to President Akufo-Addo’s 21,872 votes out of 32,196 valid votes representing almost 68% in his Abuakwa South backyard.