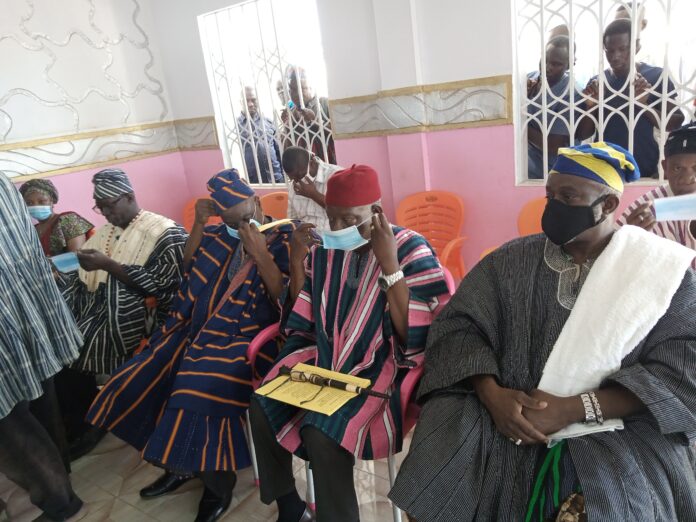 Members of the Council Of State from Northern Ghana who have been delegated by the Chairman and Council of state to represent their entire membership visited Bole in the Savannah Region embarked on an official visit on 10th May, 2021 to commend the Paramount chief of the Bole Traditional Area Bolewura Sarfo Kutuge Feso (I) on his giant and bold steps in the fight against illegal mining (galamsey, Commercial charcoal burning and illegal telling of trees.

Tumu-koro Babini Kanton speaking on behalf of his colleagues at the Palace of Bolewura Sarfo Kutuge Feso (I) said; “the council has been following with keen interest reports from your representative, Kpongri-wura and the social media about the giant and bold steps that the Bole-wura and the chiefs and queen of Bole traditional area have taken and are still taking in the fight against Galamsey and the degradation of the forest cover of the land.

“We are therefore here to commend you on your good work in this direction and to encourage you to do more to protect the citizenry and generation yet unborn”.

“Today, this delegation will present a bull and a hundred (100) tubers of yam to the inmates of the Bole Hospital as support to enable them also enjoy the festive occasion even on their side beds”.

The Bolewura commended the Members of the Council not state for donating a bull and 100 tubers of yam to the patients of the Bole District Hospital.

The Bolewura said there is perfect peace in Bole now and that all Muslims are firmly behind their Imam.

The Bolewura disclosed that he has toured over 20 communities in his traditional area to personally inform them of the decision of the Gonja Traditional council to ban illegal mining (galamsey, Commercial charcoal burning and illegal telling of trees.