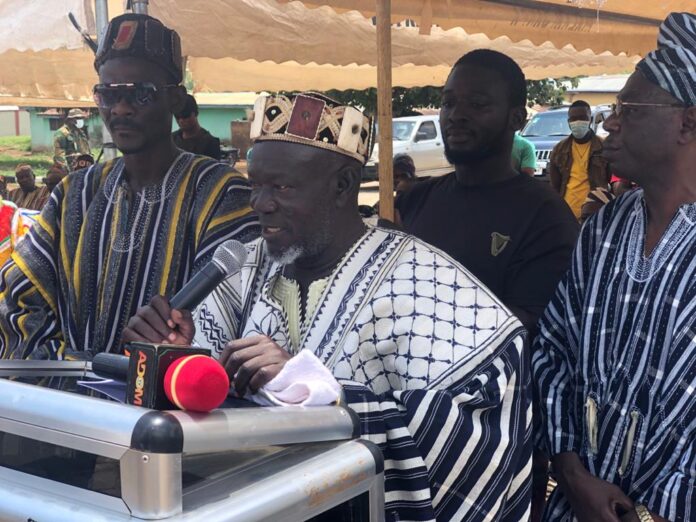 The ban on commercial charcoal burning, illegal logging, commercial harvesting of fuel wood and illegal small scale mining activities in the Savannah Region have been banned effective Monday, 10th May, 2021.

Chairman incharge of the five member committee charged to see to an end to the menace in the region Bolewura Safo Kutuge Feso (I) at a press conference held at the forecourt of the Jakpa Palace palace of Yagbonwura Tuntumba Boresa (I) indicated that From 10th May, 2021, any vehicle impounded with charcoal will be made to pay a penalty of GHc5 per bag of Charcoal and a GHc1,000 penalty charge on the vehicle load. Bolewura asked for the for the chiefs and people of the region to support the traditional leaders to end the menace.

He added that it will be hopeless if the leadership of the house of Chiefs and government in the region will pretend to allow these ill, unfriendly, mordant, heart burning, barbaric, devastating, merciless environmental collapse activities to go on in the Region.

He further indicated that the leadership of the Region has been accused, called all sort of names, mentioned in songs produced by musicians, discuss in different fora on all social platforms in the Region and therefore indicated that Enough is Enough to draw the curtain on this environmental destruction activities in the Savannah Region.

Bolewura Sarfo Kutuge Feso (I) used the opportunity to assure the taskforces formed, the youth, men and women, the aged, chiefs, children etc in the Savannah Region that the leadership of the Regional House of chiefs is awake and will do everything possible within it’s means to nib the environmental
canker in the bud and therefore invite all hands on deck to efficiently enforce the ban to achieve its objectives. Everybody in the Savannah Region is a member of the taskforce.

Meanwhile all exit points in the Savannah Region after 30th May, 2021 shall effectively be blocked according to Bolewura.
He again advised that those involved in the logging activities especially the youth should take advantage of government’s planting for food and jobs program, green Ghana or arbor day programs seriously since the region has vast lands suitable fir agricultural purposes whiles the Savannah Regional House of Chiefs put a livelihood project together to support the situation.

The Paramount Chief for the Buipe traditional area and Vice President of the Savannah Regional House of Chiefs Buipewura Abdulai Jinapor (II) on behalf of the Yagbonwura appealed to the government to support the course of ending the menace by providing security for the operations of flushing out those involved in the act.

Buipewura Jinapor further cautioned that the traditional council will deploy its own local warriors to stop the canker if government fails to support them.

He said it took the efforts of the Yagbonwura to fight for the creation of the Savannah Region after several failed efforts which the resources of the region must be protected for the future generation.

He warned again that the fight has nothing to do with politics and must be delinked from the usual National Democratic Congress (NDC) and New Patriotic Party (NPP) ways of doing things.

The Savannah Regional Minister, Mr Saeed Muhazu Jibril assured the chiefs and people of Gonja that the Savanah Regional Coordinating Council will provide the needed task force to help stop the menace. He said this administration will do whatever it takes legally, to stop all illegal logging, charcoal burning and Galamsey activities in the region.

Mr Muazu Jibril assured that those involved galamsey will not be thrown out of business but will be put into community mining groups in order to regulate their activities for the benefit of the Chiefs and people in the region.

He disclosed that a meeting with those in the Mining Business is scheduled for this Friday May 14, 2021.