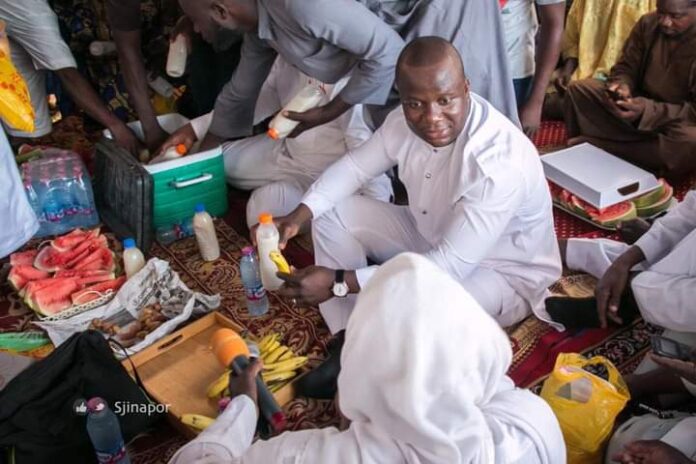 The Member of Parliament (MP) for Damongo Constituency who is also the minister for Lands and Natural Resources Hon. Samuel Abu Jinapor on Friday 7th May 2021 organised an Iftar (evening meal to break fast in Ramadan) for the Muslim Community at his residence in Damongo.

The event saw many leaders of the Muslim Community in Damongo with variety of food and drinks served to those in attendance numbering hundreds.

Hon. Jinapor in an address to the Muslim Ummah said he saw it very necessary to organise the Ifatar first of all for God to protect the constituency with regards to the disasters and also to thank them for their continues prayers for the constituency that has led to the peaceful atmosphere being enjoyed today.

He said the prayers being said in his residence on the day of the ifatar will completely water down the recent disasters that has seen many people loose the roofs of their houses,rendering many of them homeless.

He further urged the Muslim Ummah to pray for unity especially among members of the various political parties to pave the way for development.

On development, Hon. Jinapor disclosed that the water crisis situation in Damongo is what he is very focused on and used the opportunity to assure residents of Damongo and it’s environs that water will flow in Damongo very soon.

He further disclosed that as early as next week, work will commence on the building of an extra modern community center in Damongo.

He said again that the Damongo town park would also be built into an astro turf anytime soon with the contractor also set to commence work.

He said the Iftar will be a continuous event every year in the month of Ramadan.

Chief Imam of the Damongo Municipality, Alhaji Amadu Mushe praised the MP for the initiative especially in asking for special Qur’anic recitation to end the disasters in the municipality.

He said anything that is of a calamity is best solved by prayers especially the Qur’anic recitations which he believes will be a thing of the past.

He further prayed for God’s protection for the MP and also prayed for peace in Damongo.