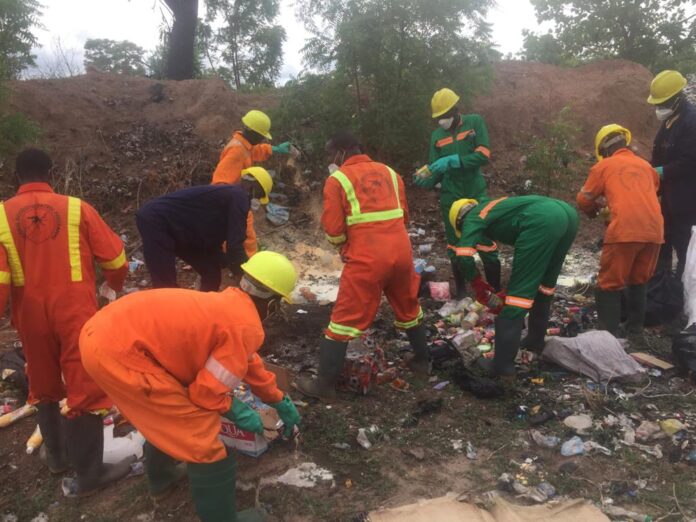 The Food and Drugs Authority (FDA) have properly and safely disposed about a hundred (100) cartons of expired ginger energy drink that were disposed at a dumping site by an unknown person on the outskirts of Bole town.

According to the Northern, Savannah and the North-east Regional director of the Food and Drugs Board Authority Mr Martin Kusi, the officials FDA stormed Bole and supervised the safe disposal activity with the assistance of the zoomlion and the environmental health department of the Bole District Assembly.

Mr Kusi also cautioned all retailers and distributors of Food and Drugs products sold to customers to be safe for consumption.

He said;
“Is your responsibility as a retailer or consumer to make sure that all the products you offer to the general public for sale should be in good condition and not dented, and must be in wholesale and not expired”.

Mr Kusi further said it is an offence by law distribute to dump or offer for sale products that have expired and also a serious offence to just dump expired products at a dumping site without proper safe disposal.

He said it is punishable by law when caught and can lead to imprisonment or payment of fines or both.

Some residents of Bole scrambled over over a thousand (1000) cartons of expired energy drinks which were improperly disposed at a refuse dump on the outskirts of Bole on the Kiape- Sonyo road in the east of the town.

The residents especially those who were first to see the cartons of the energy drink called “Ginger Flavoured Energy Drink” carried many to their homes with some drinking to the full at the dump site.

Bole based Nkilgi Fm upon hearing the information rushed to the area on the outskirts of Bole where some people around complained of seeing some school pupils also taking the expired energy drink with one drinking so many bottles of the expired drink till the stomach was full.

He urged all residents of the District to always report to the department of environmental health if their goods are expired for the necessary disposal.

Mr Baba said they will also do their investigations to identify where the expired energy drinks are came from.

Nkilgi Fm again spoke to the Bole District Health Director of Mr David Bakuri and he urged all parents not to allow their children take the expired drinks because the future implications are very dangerous to their health.

Mr Bakuri said the expired cartons of the drinks were supposed to be disposed before July 2020, but unfortunately it was not done by that time.

He said any expired drink is not good for the body and urged all those who have gone to take some of the drinks to pour them away and not drink them.