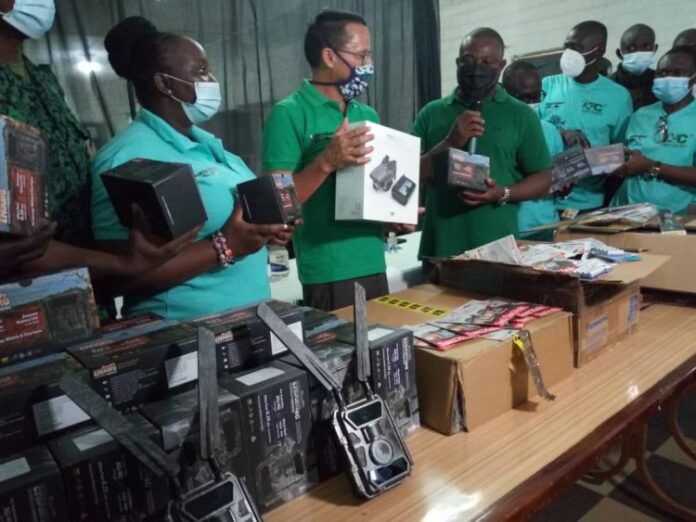 The Australian High Commissioner to Ghana His Excellency Gregory Andrews has on 9th April, 2021 handed over field equipments to the Mole National Park in the Savannah Region which is Ghana’s first, largest and most prestigious protected area.

The Australian high commissioner also cut the sod for the construction of 2 Summer huts at the forecourt of the Mole National Park information center which will be fully funded by him.

Speaking during the handing over ceremony of the equipments to the park, the Australian High Commissioner to Ghana said the equipments will help the work of the park to go on smoothly and very effectively.

He said it will be easy to get videos and pictures of the animals and also help in trapping poaching activities in the park.

He added that the GPS equipments will also help the rangers find their way anytime the get lost in the reserve.

The High Commissioner commended the staff and workers of the park for their hardwork and hopes to see much improvement in their work following the donation of the equipments.

The Manager of the Mole National Park, Mr Ali Mahama expressed his satisfaction for the kind gesture done by the Australian High Commission to them which he said is a sign of good relationship between a Government of Ghana and that of the Australian Government and also very timely especially in dealing with the poaching activities in the park.

The Executive Director of the Wildlife division of the Forestry Commission Mr Bernard Asamoah Boateng in an address said Ghana has 7 national parks, 6 resource reserves 2 sanctuaries which are under the care of the wildlife division with the Mole national park being the premier and largest after it’s establishment in 1958 and gazeted as a national park in 1971 with a size of 4,840km square. He said the park is in a process of being listed as UNESCO Global World Heritage Site.

Mr Boateng also said the park has tried to protect it’s integrity through the application of donor agencies which have been succesful and therefore used the opportunity to thank the high commissioner and the people of Australia for their support.

The Chief Executive Officer for the Forestry Commission Mr John Allotey who also addressed the gathering during the handing over ceremony said everything with wildlife in Ghana takes place in the Mole National Park since everything is referred there when it has to do with Wildlife.

He thanked the High Commissioner for his support and also used the opportunity to appeal to him to strengthened the relationship between Australia and Ghana through the development of a sister city relationship that is focused on ecotourism between the two.

He added that equipments received from the Australian high commissioner will go in a long way to help especially in data collection and also in getting more information especially with the nocturnal species in the park.

The Savannah Regional Minister Mr Saeed Muhazu Jibril thanked the Australian high commissioner for the support. He said the importance of the park can never be underated since apart from the tourism aspect, it also serves as a source of employment in the region.

He also used the opportunity to appeal for more from the donor agencies especially in the areas of housing for the rangers and assured the park of the full support of the government in the development of the park.