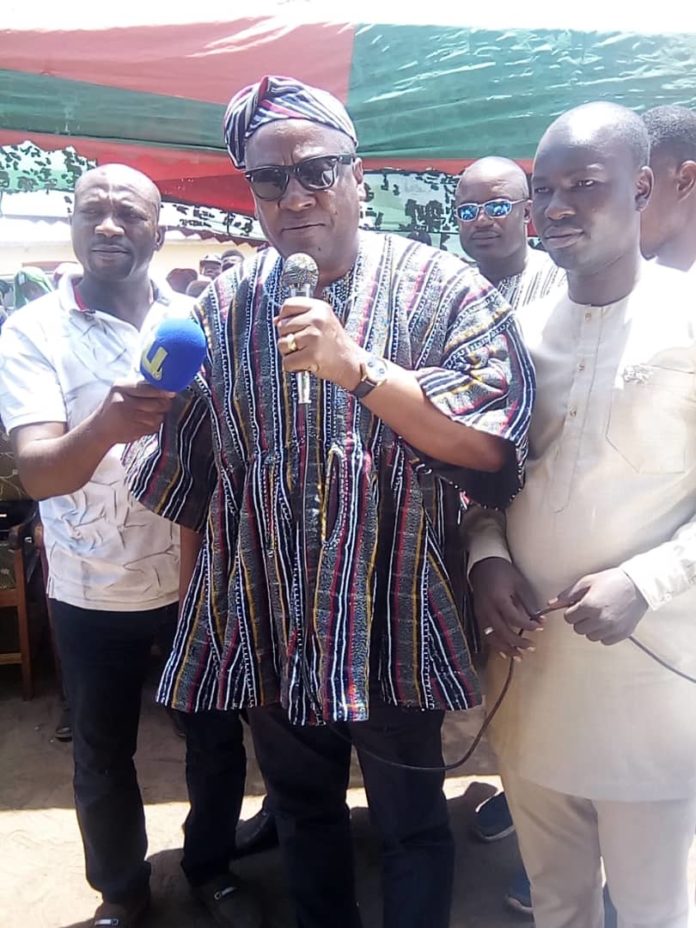 Former President of Ghana and Flagbearer of the opposition National  Democratic Congress (NDC), John Dramani Mahama has promised to work on the Tuluwe road which is in a very deplorable state when voted into power.

Former President Mahama made this promise when he stormed the funeral grounds of the late Tuluwewura Mahama Yahaya Bonyanso at Tuluwe in the Central  Gonja District of the Savannah Region on Thursday 12th March, 2020.

The Former president who was welcomed by hundreds of people in his speech prayed for the late Tuluwewura and also promised the people of the Tuluwe Traditional Area of making sure their road is constructed when voted to power again.

Former President John Dramani Mahama speaking in the Gonja language said;”We left all our work we were doing and came to mourn with the people of Tuluwe and to hear what the elders of Tuluwe will tell us about the funeral. May His soul rest in peace and may he be accepted in heaven; he said.

“We saw the nature of the Tuluwe road. We gave it to a contractor but if the new7 government had continued we wouldn’t have been talking about the bad nature of the road today…Insha Allah NDC will come back and work on this road”; he said amidst a big applause from the people gathered.

The Chiefs and people of Tuluwe on receiving former President Mahama made mention of the telephone reception as well as drinking water as a major problem.

Former President Mahama in response said; “Fortunately I’m here with the Minority leader (Hon Haruna Iddrisu) who was the Minister of Communication. So we have taken note of what you said and will work on it by talking to the network people when we get to Accra”.

The NDC Flagbearer also spoke on the water issue of Tuluwe stating that “water is life”.

He added that he knows very well lack of water is another critical challenge for the people of the Tuluwe area and again said the issue of water will also be a thing of the past after he is voted to power.

John Dramani Mahama also paid a courtesy call on Bundawura Nbema Soale who resides at Chama in the Tuluwe Traditional Area. By the traditional succession arrangement of the area, the Bundawura succeeds as next Tuluwewura.

Former President Mahama donated 9 bags of rice, 3 bags maize, assorted drinks, a bull, 5 cans of oil and Gh¢ 5,000 to support the family for the funeral of the late Tuluwewura Mahama Yahaya Bonyanso.