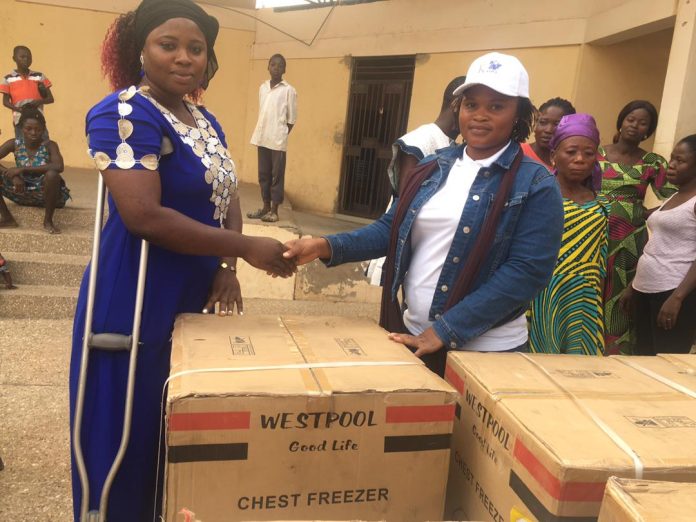 The District Chief Executive (DCE) for Sawla-Tuna-Kalba in the Savannah Region, Madam Barikisu Losina has handed over People Living with Disabilities (PWD’s) in the district as they celebrate their annual Disability day on Thursday 22nd December, 2022 in Sawla.

The DCE said at a brief ceremony that, the main aim of the disability fund is to empower people PWD’s to becoming self dependent.

She mentioned that, the assembly has been able to support People Living with Disabilities in so many ways and will still fight harder to do more for the them in the district.

Madam Barikisu Losina added that apart from the donations, the assembly has been paying medical bills for PWD’s as well as paying school fees, whiles
making available sums of money to those who applied for support from her office to start some trade which will keep them busy and help them become self dependent.

The DCE indicated that the donation of tricycles, refrigerators, hair dryers and other items was as a result of the applications the assembly received from the PWD’s.

Madam Barikisu concluded by saying, the people living with disabilities need to be empowered by supporting them so that they can also be able to pay for their wards school fees and medical bills without depending on any one which will make them feel part and important in the community in which they reside.

Mr James Jorbodi Puosambo the Chairman for the PWD’s in the Sawla-Tuna-Kalba District appealed to the district assembly to always try to get to know the needs of people PWD’s before buying the items.

He said, sometimes they PWD’s do not see the importance of some of the materials giving them and suggest that the assembly should always ask them what they need before bringing them the items.

Mr James again said that the Assembly should always consult the PWD’s and the district assembly board members.

He further said some of the Assemblyman bypass them without giving them any information but will go straight to the district assembly using names they pick money from the assembly without the notice of the person.

James Jorbodi Puosambo mentioned that, the people living with disabilities should be the same people going for (LEAP) as they the disabled can’t do any hard work for a living but always need assistance.

One of the beneficiaries Madam Amadu Zakiatu said after writing so many letters to the assembly asking them for help to start running some businesses on their own, the DCE has made it possible after listening to their cry by coming to help them with the items.

She encourage the others who did not receive any items to stay calm because their turn will come soon.