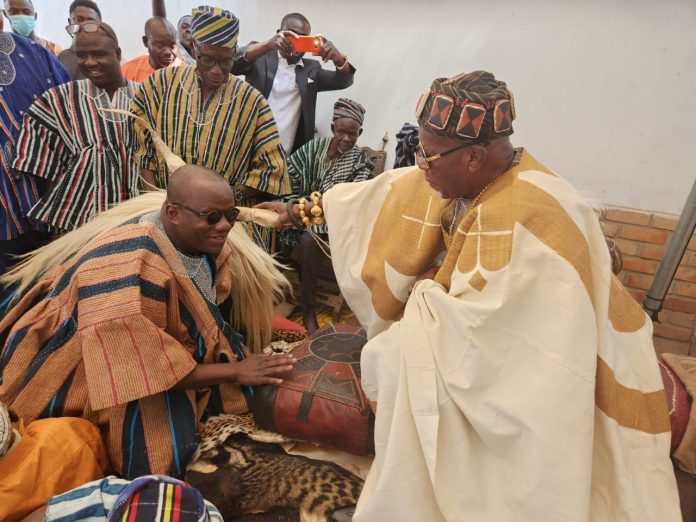 The Member of Parliament (MP) for the Damongo Constituency and Minister for Lands and Natural Resources Hon Samuel Abu Jinapor has appealed to the people of the Buipe Traditional Area in the Savannah Region to live in peace and unity for the development of the area.

Addressing a durbar of Chiefs and people of the area after paying a courtesy call on the Paramount chief of Buipe on Friday 23rd December 2022, the Damongo Constituency MP indicated that there can never be development without peace and unity within the Savannah Region.

He mentioned unemployment, low standard of education among other issues that is affecting the newly created Savannah region which can only be solved through unity and peaceful coexistence among the people in the region.

He added that the falling standard of education in the region should be of great concern to all since education is the bedrock of the development of every area in the country and therefore appealed to everybody in the region to come together to change the narrative.

He assured the Paramount Chief of the Buipe traditional area Buipewura Abdulai Jinapor (II) of bringing back to live the Sheanut factory in Buipe including and also see to the hlBuipe water system, the construction of the Buipe township roads and an ultramodern Astroturf for the community.

Buipewura Abdulai Jinapor (Ii) in an address welcomed the minister and his entourage to his Palace.

Buipewura Jinapor appealed to the minister to help revive the Buipe Sheanut factory which has been on its knees for sometime now.

He further made an appeal to the minister to help facilitate in the construction of the Buipe to Damongo road and the completion of the Kusawgu to Tuluwe roads since those roads are very crucial for opening your the Buipe traditional area.

The Minister said he will in January, 2023 come to the aid of women in the Buipe traditional area by establishing the Buipe women empowerment support program in to financialy empower the women that area for their various endeavours.