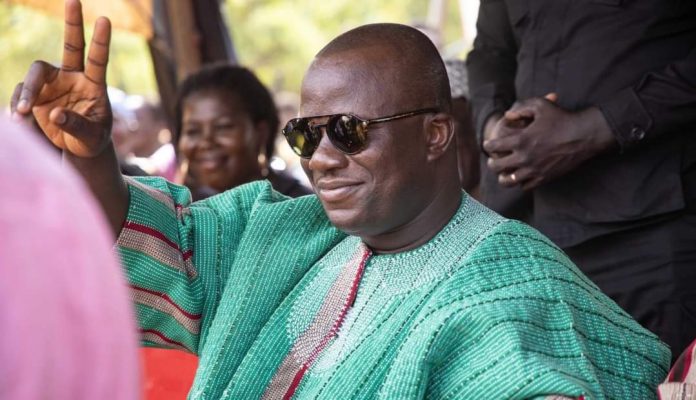 The Member of Parliament (MP) for Damongo constituency and Minister for Lands and Natural Resources Hon Samuel Abu Jinapor has said he is not pursuing any presidential ambition but just worming for the development of the Savannah Region.

The MP for Damongo made these comments in an interview on with the media at Bole after meeting NPP Constituency Executives, Electoral Area coordinators, Council of Elders as well as Polling Station Executives.

The Lands and Natural Resources Minister was asked about a presentation in Parliament on cultural, tourism and political heritage of Savannah region in relation to his political ambition.

The Damongo MP responded it is his priority to see to the development of the Savannah and the people of Gonjaland but not just his constituency.

Hon Abu Jinapor said he is setting a pace whereby not withstanding any political party that is in power, Savannah region should be the outmost beneficiary.

Abu Jinapor said all should come together to help crate jobs for the Youth and all work for an accelerated infrastructure development in the Savannah Region.

He entreated all to see the creation of Savannah region by President Nana Akufo-Addo as a means for development and not a political decision and that all should consider the development the region will attract to the people.

According to him, a visit to Bole has diagnosed the biggest challenge which is a municipal status and the rehabilitation Bole-Sawla highway.

He said our agriculture value will also be developed and he will ensure that the GHc27m AFDB will be well utilized to the benefits of his people.

He stated;
“These are the reason I am so concern about not presidential ambition”.

The Minister for Lands and Natural Resources pleaded with the people to bear with the current economic crisis in the country and have the belief that the NPP government will turn things around.

He said it is true that the Russia- Ukraine is partly responsible for Ghana’s economic problems.