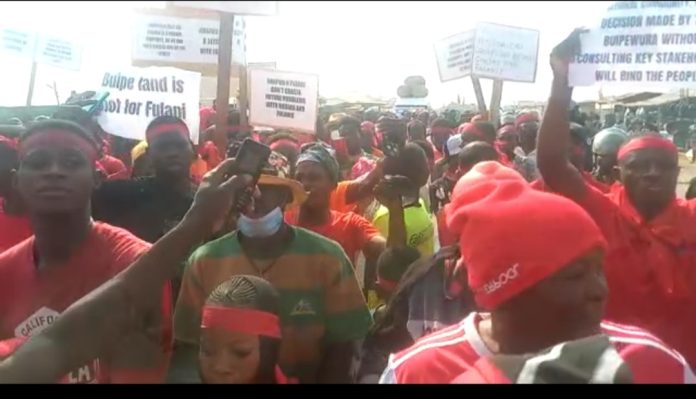 There was a demonstration against the Paramount Chief of the Buipe traditional area Buipewura Abdulai Jinapor (II) by the youth of Buipe on Sunday 18th December, 2022.

Many Policemen were deployed to the Buipe community who ensured the demonstration was in accordance to public order.

The demonstration by the youth was basically against the decision by the paramount Chief of Buipe traditional area, Buipewura Abdulai Jinapor (II) to allocate several hectors of land to Fulanis in the area and as well enskin one of them with the tittle; “Fulani Mande Chief”.

The Youth who demonstrated on the Principal Street of Buipe were on their way to present their petition to Buipewura, however security personnel prevented them from entering the Palace.

As a result the Savannah Regional Minister directed the District Chief Executive (DCE) for Central to take the petition and hand it over to Buipewura.

The Youth in their petition gave the Buipewura 7 days to address their grievances other wise they will take another action.

The Youth of Buipe in their petition titled; “petition to the Buipewura, Jira Abdulai Jinapor II on the happenings in Buipe Traditional Area stated;

We are youth of Buipe who are not happy with your style of leadership.

One recent issue that the youth disprove of is your recent unilaterally allocation of land to Fulanis and enskinned a Fulani Chief without regard to the collective interest of the people of Buipe in particular, and the Gonja Kingdom in general.

The decision you took is only for your personal benefit to the detriment of our collective survival. Several issues have since arisen from the enskinment of the Fulani chief you designated as Mande Fulani Chief.

In order to address the following complaints that resulted from the enskinment of a Fulani as the Mande Fulani chief without consulting the sub-chiefs, the youth of Buipe, as well as the gifting of land to the Fulani community without the consent of the Yagbonwura, the King and
Overlord of the Gonja Kingdom, we, Youth For peace and Development in Buipe present this petition to you and we demand action from the following;

We also painfully remember a brother who lost his life as result of reckless riding of motor bikes during their Tabithalaku in Buipe.

Quite apart from this, three (3) persons sustained several degrees of fractures and rubbering cases and other social vices around Buipe and its environs.

But you Buipewura Jinapor II, delegated your traditional secretary, Neripwura Kipo, to rather use insulting words on our hard-working PRO, Borejinkpr Mufti, by branding him a none native of Gonja Land and Buipe. Neripwura spewed such words on Borejinkpr Mufti without appreciating the pain Borejinkpr Mufti biological grandfather, Rtd Regimented Sergeant Major Mahama Damba of blessed memory went through during Buipewura Jinapor’s chieftaincy tittle contests. The major had to relocate from his house he built at
Warantu to become a refugee at Yipala. The said Rtd Police Major was then a sub chief in Buipe, but a refugee in same town with limited outings, all because of Buipewura Jinapor and family’s interest.

At that time, where was Neripwura Kipo, who now claimed to love Buipewura Jinapor to the extent of branding Borejinkpr Mufti a stranger in Buipe? We wish to state that, Borejinkpr Mufti is a native of Kafaba, an important traditional Area in Gonja Land and Buipe is his maternal home.

Meanwhile the Buipe Traditional Council has said it has become aware aware of a demonstration by some section of the youth group in Buipe and therefore responded to some of the claims of the Youth.

A statement issued by the Public Relations Officer (PRO) of the Buipewura Prince Gbanso responded to somwnof the claims of the Youth of Buipe.

On the Claim of enskinment of a Fulani kinsman as a traditional chief in Buipe, the Buipewura’s said “we wish to state in the strongest possible terms that this allegation is completely false, baseless, and unfounded. The Buipe-Wura’s palace wishes to reiterate that no body of Fulani extraction has been esnkinned as traditional chief of Mande a suburb in Buipe. On the contrary, Mr. Abdulai Alhassan (who is the biological brother of fhe ring leader of the demonstrators) and a royal from the Chinchanko gate in Buipe, was nominated as the Mandewura of Buipe on Friday 16th December at the Jinapor palace”.

The Buipewura’s palace said for the record, the Buipewura is the Vice-President of the Gonja traditional council and can only exercise his duties in that regard. : Buipewura has an excellent working relationship with the Yagbonwura, who is the overlord of all Gonjas and will never attempt to usurp the authority of the Yagbonwura and so it is the utmost desire of Buipe-Wura Jinapor II to lift high the image of Gonjaland, and the quest to pursue this noble objective as the Vice-President of the Gonja traditional council cannot be said to be an attempt by the Buipe-Wura to hold himself as the Yagbonwura”.

On the claims that the Buipe stadium was not constructed by the Jinapor palace, the Buipewura’s palace said; “for the record the Buipe Development committee established by the Buipe-Wura Jinapor II saw to the construction of the Jinapor Stadium, in addition the committee constructed a fully furnished dormitory for students of the Buipe Technical School, provision of Poly-tanks and beds to the Buipe senior high amongst others”.

On the demands against Fulanis living or holding their national conference in Buipe the Buipewura’s palace said they wish to place on record that “it is the desire of the Buipe-Wura to ensure that indigenes of the Buipe traditional area coexist in peace and harmony with other tribes just as Gonjas continue to live in peace on the soils of other tribes. Therefore, any demand to evict or deny Fulanis access to basic amenities will be unconstitutional and against the ECOWAS principles”.

Finally the Buipe traditional council said “they wish to assure the general public that the doors of the Jinapor palace are always opened for engagement with his subjects and the general public at large and therefore wish to encourage those in doubt to seek clarification from the palace before making hasty conclusions, which has the tendency of creating tension and misunderstanding’s on traditional matters”.