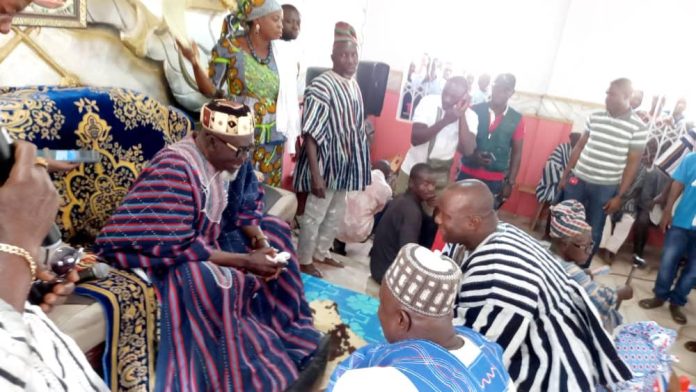 The Paramount Chief of the Bole Traditional Area Bolewura Sarfo Kutuge Feso (I) has urged the Minister for Lands and Natural Resources Hon Samuel Abu Jinapor To help push for the Bole District to be elevated to a Municipal status.

Bolewura said the Sawla-Tuna-Kalba district was part of the Bole district but was carved out of to attain a full district, adding, “the current Bole district is still a very big with bigger communities like Banda Nkwanta, Tina Bamboi and others hence my appeal for it to be upgraded to a Municipal status”.

Bolewura Safo Kutuge Feso (I) made his appeal at his Palace in Bole on 25th, November 2022, when the Minister for Lands and Natural Resources and Member of Parliament (MP)
for Damongo Hon. Samuel Abu Jinapor paid a one day working visit to Bole.

According to Paramount Chief of the Bole Traditional Area, the Savannah region is looking up to the Minister for Lands and Natural Resources because he is the “Godfather” of everyone in the government of NPP.

Bolewura Sarfo Kutuge Feso (I) indicated that, “though we have a lot of people from the Savannah Region who had appointments, but when we talk about the “Godfather”, of this Region, you are the one all is looking up to”

Hon. Samuel Abu Jinapor expressed his gratitude to Bolewura for the warm reception.

He added that in the next 2 to 3years, political campaigns will begin and politicians will be visiting the palace always, but he is not the kind of person who visits his father when it is only time for politics.

Hon. Samuel Abu Jinapor assured the Paramount Chief that when he gets back to Accra in the next three days, he will make sure he personally go to the Ministry of Regional Reorganization and Development and Decentralization Hon. Dan Botwe to see how to expedite the process of elevating Bole District to a Municipal status.

According to Hon. Abu Jinapor he is also pushing for his government to make the Bole to Salwa road is asphalted because is im a deplorable state.