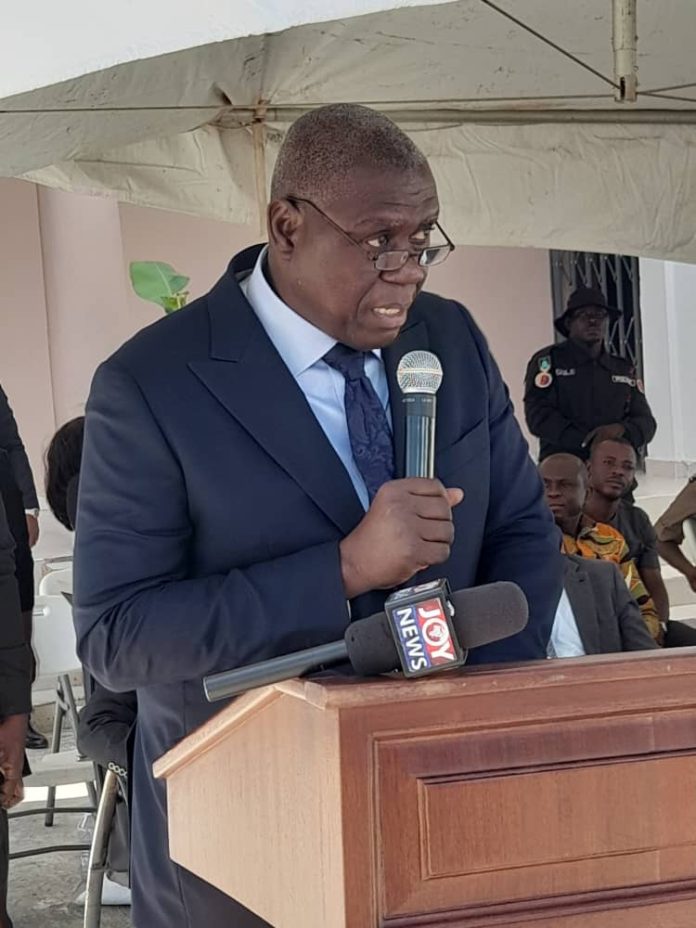 The Judicial Service of Ghana led by the Chief Justice of Ghana, His Lordship Justice Kwesi Anim Yeboah has commissioned a circuit court complex for the Damongo Municipality in the Savannah Region to help bring justice delivery to the doorsteps of the people.

The Damongo Court Complex has special features such as a child testifying room fitted with technological mechanisms such as CCTV system, Direct Transcripts system which will facilitate the recordings of proceedings at the court in real time.

The Court complex also has an accommodation for the judge, holding room for juveniles,
a room for testifying ying, courtroom and a secretariat. Additionally it comes with a standby generator, solar power and a boreholes.

Speaking at the ceremony in Damongo on 16th November, 2022, to commission the facility, Chief Justice Kwasi Anin-Yeboah indicated that history is in the making in the Savannah Region for the commissioning of the project, adding that, geographical location should not be a barrier for the justice delivery system in the country.

His lordship Justice Anin Yeboah disclosed that the court will sit on cases of sexual abuses aimed at increasing access to justice for women and children in society.

He also said Damongo and it’s surrounding communities have waited for a long time to benefit such a modern day infrastructure, which will help reduce the burden and pressure on other auxillary court houses in the region.

The Chief Justice said access to justice has always been a prime concern to everyone and there is a need to adequately build on the infrastructure needs of the people in Ghana, which must support their values as well as define their wellbeing.

According to him, the judiciary service, if closely present in the region will ensures that litigants and sentiments of the people is efficient and timely addressed.

Tne Chief Justice further said the commissioned circuit Court complex is a friendly, gender based violence court which will handle cases of abuse against juveniles, women and men.

His Lordship, Justice Anin Yeboah called on the court staff to exhibit a high level of professionalism in their daily duties and to treat all the people who seek legal aid fairly and equally for the facility to be patronised.

He thanked the government for addressing the judicial gap in the country by providing accomodations and court facilities throughout the country for the administration of justice.

The Chief Justice used the opportunity to thank ministry of Local government and Rural Development for financing the project and also thanked the Chiefs and traditional authorities for releasing the land for the project.

The Savannah Regional Minister Mr Saeed Muhazu Jibril in a speech expressed his gratitude for the establishment of the Court complex in the Savannah Region added that the facility will go a long way to help since most criminal related issues are referred to Bole Circuit Court for adjudication.

The Regional Minister said; “I am particularly happy because the inauguration of this court means the tentacles of the Judicial service has been spread and it would be felt Heer in Savannah Region particularly in.the Regional capital”.

He said the Regional status the Savannah Region is accorded requires that the region should have a good court system for a good justice administration because the availability and access to court is of basic importance for development.

Mr Saeed Muhazu Jibril expressed his gratitude for the establishment of the circuit Court complex in the Savannah Region especially in Damongo, he indicating that it will go a long way to help in the dispensation of justice services since most criminal related cases are referred to the Bole Magistrate Court for adjudication.

Mr Saeed Muhazu called for collaboration of all stakeholders to support and patronize the court house for it to be impactful to the region as it can be used as a leverage for the establishment of a High court.

He entreated all those that matter to uphold the maintenance culture of the facility as it is very important for it’s longevity.

The King and Overlordof Gonja Yagbonwura Tuntumba Boresa (I) in a speech read on his behalf advocated for the establishment of magistrate courts across the Savannah Region.

The Yagbonwura’s speech said the Savannah Region is now justice satisfied and that the court is coming to help the traditional Authority and that no Chief will interfere in the justice system in the Region.