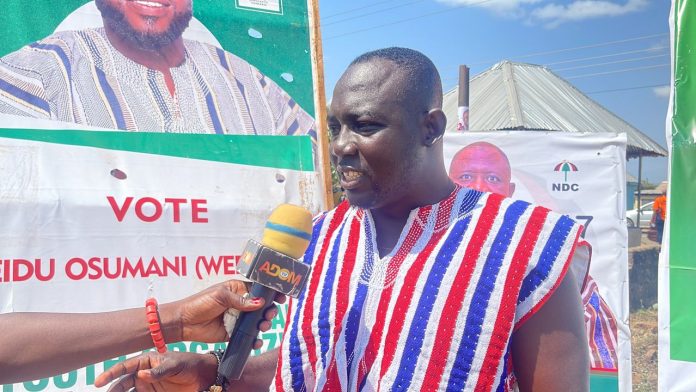 The New Patriotic Party (NPP) Organiser for the Savannah Region Nana Kwame Aboagye has urged the rank and file
of his party members to brace up for victory in the region since more seats would be added to the party’s basket following the caliber of Executives the NDC selected at their regional elections that took place in Damongo on the 13th November, 2022.

In a statement copied to Bole based Nkilgi Fm on 14th November, 2022 Nana Kwame stated that, the NPP in Savannah Region would have had a nightmare if
the likes of Seidu Osman popularly called “Chenche” had won the position of NDC Youth Organizer for Savannah region.

He added that, since the most vibrant and well organise candidate Seidu Osman has lost the elections, then he Nana Kwame Aboagye promises the NDC of recording more zeros at Polling stations not only in the Daboya-Mankarigu Constituency but in the other constituencies in the region.

He said, the elected leadership of the NDC is a sign of victory for the NPP in the region since they are of no match to that of the NPP.

The Savannah Region NPP Organiser said, the speeches of all the speakers of the NDC was geared towards winning the lost seats including the Damongo seat which he described as “day dreaming” by the NDC because the Damomgo is already won by his party and that they will add more seats to the 3 they already have in Savannah Region.

Nana Kwame alleged that the change of venue of the NDC Savannah Region election from the Damongo Astro turf to Mahama Guest House was because the party wanted to avoid the legacy of the Member of Parliament (MP) for the Damongo Constituency Hon Samuel Abu Jinapor to avoid shame which rather made matters worse after the elections took place on another platform which construction was financed by the same Abu Jinapor.

He therefore appealed to the NDC executives to contact him as the organiser to open the premises of the MP’s office for them free of charge in their subsequent elections, adding that the platform used at the guest house is for tailors and dressmakers and the disabled for their activities.

He used the opportunity to further appeal to the people of the Savannah Region to have confidence in the NPP since the economy is surely bouncing back on track very soon.

The Damongo water project according to Nana Kwame will kick start before the end of the year including the Damongo market that is under construction among other projects.