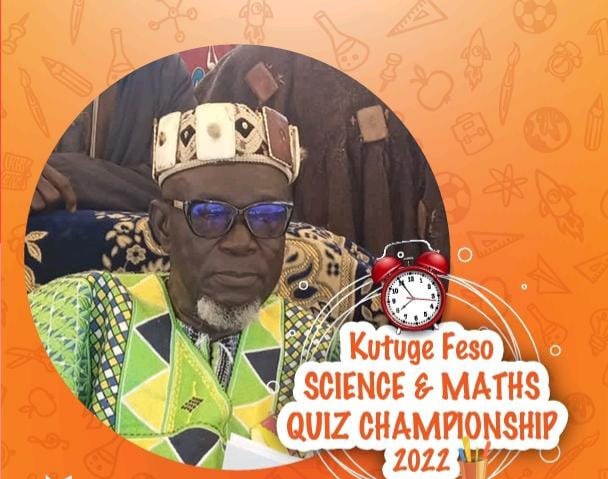 Bole St. Kizito JHS ‘B’ has won the the Grand Finale of the 2022 Bolewura Sarfo Kutuge Feso (I) Science and Maths Quiz Championship held on 20th October, 2022 at the Wuripe and Sons Royal Lodge (Bole Dubai) Conference Hall with three schools competing for the ultimate prize.

The Schools that made it to the finals and competed for the ultimate prize were Bole Methodist JHS ‘B’, Nyange D/A JHS and St. Kizito JHS ‘B’.

The Quiz ended with St. Kizito’s JHS ‘B’ in Bole emerging as the winners of the competition with 34.5points whilst Bole Methodist ‘B’ JHS in Bole closely followed with 34points with Nyange D/A JHS getting 32points.

The Damba Quiz of the Paramount Chief of the Bole Traditional Area Bolewura Sarfo Kutuge Feso (I)
dubbed “Kutuge Feso Science and Maths Quiz Championship 2022” seeks to improve educational standards at the basic level in the Sawla-Tuna-Kalba and Bole districts which mostly fall under his paramountcy.

At the end of the competition, the winners were given a brand new laptop, trophy, exercise books, mathematical sets, certificates and medals with all other contestants awarded certificates, Medals and Branded books of Bolewura Sarfo Kutuge Feso(I).

All coaches of the JSH’s involved got bundles of exercise books with all contestants who participated in the contest also taking books.

Speaking before the contest, the Secretary of the Bolewura Mr Haruna Abdulai Obey who delivered Bolewura’s speech said in 2023, the contest will start in March which will allow all the circuits to have more time to do their respective circuits competitions.

He said the Bolewura wish to thank all the schools in the Bole Traditional Area for participation.

The Secretary of Bolewura added that; “The Paramount Chief is of the view that the best way yo increase our performance in BECE and WASSCE results is to start form the basic level to build them up and get to the higher level and that is why the Bolewura is concentrating on basic education”.

The General Manager of Wuripe and Sons Royal Lodge Mr James Dziwornu said the are always ready to support the Bolewura in every activity the palace has.

Mr Dziwornu said he pray by next year the program should be bigger than it is this year.

The Quiz mistress and a Public Health Nursing Lecturer at the Bole Nursing and Midwifery Training College Madam Mercy Kuug thanked the Bolewura and the entire traditional council for the opportunity given her to be the moderator of the competition.

Mercy Kuug said though this is her first time of being a Quiz mistress but she wish to thank the technical team for their support since the beginning of the week till the end of the competition.

She said the participants have realised their week points and she believes they with the help of their teachers will work on that.

The Assistant Quiz Master who is also a public health nurse at Bole District Hospital Mr Ewuntomah Joachim encouraged the students to learn hard as he understands the quiz will motivate them to do.

Ewuntomah Joachim said the idea of the Bolewura to organize a Quiz for the Traditional Area tells it that Bolewura is truly an educationist and has love for his as the children today shall be the future leaders of tomorrow.